Carlton lost to Richmond by 17 points at Punt Road Oval. Tommy Downs was suspended until the end of the followng season.

Despite a come-back in the final quarter, the Blues went down to top-of-the-ladder Richmond by 17 points.

The Sporting Globe in it's Saturday match report made no mention of the Downs-Hunter incident.
However following the match report;
"Downs (Carlton) is to be reported by the goal umpire on the charge of having kicked Hunter (R) in the third quarter."
(Sporting Globe July 25 p2)

Tommy Downs was reported and suspended for the remainder of 1931 and all of 1932 (effectively 29 matches) for kicking Maurie Hunter, the fourth time Downs had been reported against Richmond.

Whilst Tommy was undoubtedly a "rugged" player he would seem to have suffered unfairly at the hands of the tribunal. The 4 charges against Richmond were the only charges of his League career and he was outed for 60 matches on three guilty verdicts. Harsh justice indeed.

Downs kicked out
The VFL went behind closed doors to consider the final appeal over the Tommy Downs case, and after lengthy deliberation decided to reject it. Downs, the brilliant Carlton rover and vice-captain on a number of occassions this season, was reported by a goal umpire for kicking Richmond Captain Maurie Hunter during the game, in which Richmond won. Downs was suspended by the League for the rest of this season and all of 1932. Downs has strenuously proclaimed his innocence of the charge, the worst that can be made in football, and has thousands of witnesses all willing to agree with him. 1800 Carlton members packed an angry meeting at the Brunswick Town Hall in protest, and asked the Committee to appeal once more to the League to re-open the case, citing a precedent in 1923. Eleven of this number signed statutory declarations saying that it was not Downs' leg which came into contact with Hunter. R.G.Menzies QC has provided advice that no further legal avenues of appeal are open. The popular player will have to wear the stigma. - 100 Years of Australian Rules Football. 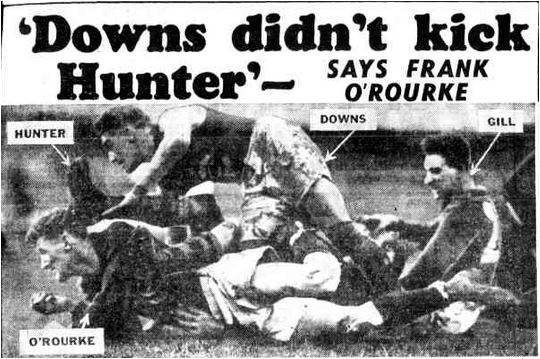 At the end of this round Carlton were in 3rd spot on the ladder with a percentage of 144.5. 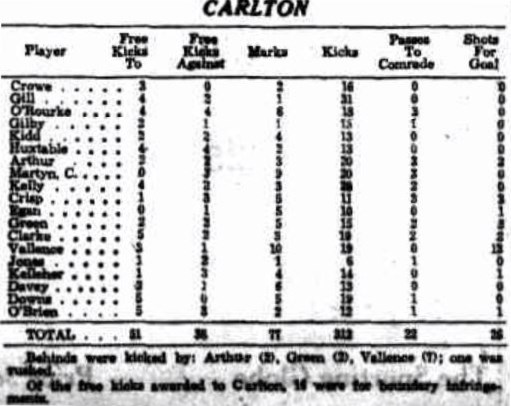