It's not the size of the dog in the fight that counts...

Tommy Downs played in the toughest era of VFL football - the Great Depression of 1927 to 1933. It was a time when four in every ten men, and nine in every ten women were unemployed. League footballers were blessed because they were relatively well paid, but it was a dog-eat-dog era where only the strong survived. There wasn't much of Tommy - at just 159 cm (5ft 3 inches) and 65 kg, he was one of the shortest players ever - but he could play, and what he lacked in stature he more than made up for with his tenacity. As his tribunal record shows, he was obviously willing to accommodate anyone when the insults, the fists and the elbows started flying.

Born in North Fitzroy in 1901, Tommy earned a reputation for skill and aggression as a star rover for Preston in the VFA between 1919 and 1921. The following year he crossed to Northcote, where he won the 1925 Recorder Cup (awarded to the Best and Fairest player in the competition). That achievement led to an offer from Carlton, and so, early in 1927 – as the first tremors in the financial markets of the USA heralded a disaster in the making – Tommy Downs agreed to join the Blues. The hitch was that Northcote refused to clear him, so Tommy incurred lifetime suspension from the VFA by crossing to Carlton without a clearance.

Downs went on to play 56 matches for Carlton in five seasons (1927-29, 1931 and '33) during which he was suspended for 60 games. The majority of those came when he missed the entire 1932 season after being found guilty of kicking Richmond’s captain Maurie Hunter in a match at Punt Road in round 12, 1931. However, both Downs and the club were united in their belief that he was innocent of the charge, and that he had been convicted on his record, not the evidence.

Subsequently, a meeting of Carlton members was called to protest the decision, and a crowd of around 2000 packed Brunswick Town Hall. Tommy’s case was taken up by Mr. Robert Menzies, QC (later Sir Robert - Prime Minister of Australia for over 20 years) who was a life-long Carlton supporter. But there was no avenue of appeal in place at that time, so Tommy and the club were forced to pay a very high price for what turned out to be an umpire's mistake. Some years later, The Sporting Globe published a photograph taken by a spectator at the match (a Richmond supporter) that clearly showed it was not Downs who had made contact with Hunter. In fact, it was a team-mate who had accidentally kicked the Tiger skipper, and the umpire had only pulled out his notebook to stop the brawl that he feared was about to erupt.

In all, Tommy was reported three times in his career, on a total of four charges, and it’s obvious that he reserved a lot of his belligerence for matches against Richmond. On the first occasion, in the 1928 Semi Final against the Tigers, he was booked and suspended for 12 games for striking Jack Fincher, while Richmond's Allan Geddes was suspended for 8 matches for striking Tommy. Downs was found guilty again after the 1929 Preliminary Final on two charges; one of striking, and the other of elbowing Richmond’s Don Harris. By then, the VFL judiciary was under intense pressure to clean up the game, and there seems little doubt that Tommy was made an example of. He was outed for a whopping 19 games. Harris was cleared of elbowing Tommy, but found guilty and reprimanded for ‘rushing’.

That harsh sentence kept Downs off the field for all of 1930. When he eventually came back, it didn’t take long for hostilities to be resumed. After Carlton met Essendon in round 3, 1931, Bomber Keith Forbes was suspended for four games for attempting to strike Downs. Six weeks later, North's Wally Carter copped six matches when he was found guilty of charging Carlton’s feisty little rover.

Then came that ill-fated return match against Richmond at Punt Road Oval in July, when Richmond’s captain reeled out a pack, and the field umpire reached for his book. Found guilty of the worst crime in football; kicking, Tommy was suspended for 29 games – which ruled him out of the remainder of 1931, and all of 1932. Downs served out his suspension, and came back to play again at Carlton in 1933. By then aged 32, he managed six games and six goals before retiring for good.

That same year, Tommy's brother Albert played his one and only VFL game for Collingwood. Tommy and Albert were cousins of Lyle (47 matches) and Johnny Downs (1 match) who both also played senior football in the Navy Blue guernsey. Lyle Downs, who played 47 games with the Blues, but died from a heart attack after a training session in 1921. Some 1000 mourners attended his funeral.

Legend has it that Downes was almost lost to senior football before he started. When he joined Northcote, he was offered a job at Joshua Pitt's tannery in Gadd Street. Pitt was a patron of the Northcote club, and one advantage of working at the tannery (which is one of just two or three operating in the metropolitan area today) was that it overlooked the somewhat misnamed Fitzroy Racecourse, a well-known midweek venue for pony and trotting meetings. According to the story, Downs in his first week climbed onto the roof of the tannery at lunch-timeto watch the racing. Unaware that he was sitting next to the whistle that signalled the start and end of shifts, he got such a shock when it sounded at the end of the lunchbreak that he nearly fell off the roof, being grabbed just in time by his wiser teammates! 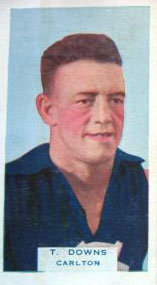 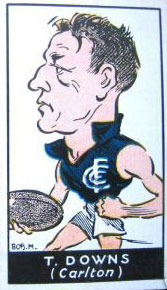 1933 April 14, after a practice match at Princes Park in which Downs captained one of the teams, he applied to the committee for an open clearance.
He did not state his reasons, but The Age thought that as Carlton had plenty of good small men, he may be keeping a younger player out of the team.