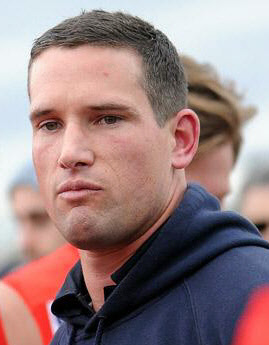 Former Fremantle Docker Luke Webster spent five seasons on the Fremantle Dockers’ list between 2003 and 2007, but his career was restricted to just 33 matches by chronic knee problems. When his playing days ended in 2010, he was appointed as a development coach at Carlton. Two years later, after a solid grounding under Brett Ratten and Mick Malthouse, he accepted the additional role of senior coach of the Northern Blues.

Born on May 25, 1982, Webster was a member of a prominent West Australian footballing family. His grandfather Ray, father Ron and brother Ryan all played senior football in the WAFL with East Perth, and Ron Webster later served as CEO of the West Australian Amateur Football League. Armed with this pedigree, Luke made his way quickly through the ranks of WA junior football to be appointed captain of the WA Under-18 team in the 2000 National Championships. By then he, too, had already played senior football for East Perth, and was seen as a probable first round AFL draft pick. However, during the first match of the championships, he went down with a torn anterior cruciate ligament in his left knee, and was sidelined for almost 12 months.

Eventually, Webster returned to the field for the Royals, and went on to celebrate his comeback by starring in a back pocket when East Perth demolished South Fremantle in the 2001 WAFL Grand Final. Although primarily a midfielder, he could also be a creative and attacking defender when required. The Fremantle Dockers agreed, and recruited him to AFL football at number 1 in the 2002 Rookie Draft.

Luke began 2002 by impressing in a couple of pre-season games for the Dockers, only to be shattered when his reconstructed knee buckled again during a practice match against Collingwood at Fremantle Oval in early March. It was a disaster that wiped out another season for the 21 year-old, but it also strengthened his resolve to make amends – which he did.

Playing as a defensive midfielder, Luke hit form early in 2003 for the Royals, and his selection in the WA state side for the clash against South Australia at Fremantle Oval was no surprise. The Croweaters won easily, but Webster was outstanding for his team and was awarded the Simpson Medal as WA’s best player. In July he made his AFL debut at last for the Dockers in a thrilling 3-point victory over Brisbane at Subiaco Oval, and in early September at the same venue he was one of Fremantle’s best in the club’s first-ever finals team – beaten by Essendon in an Elimination Final.

One week later, during East Perth’s Elimination Final clash against West Perth, Luke was stretchered from the field once more. This time, his right knee had let him down, and another season was over. For some weeks over summer there was conjecture that Fremantle would cut him loose, but they stuck by him and he made it back on to the field for the last two games of 2004. From 2005 to 2007, Webster averaged nine AFL games per season for Fremantle, where he was widely respected. He was named Best Clubman in 2006, and played finals football when the Dockers made it through to a Preliminary Final.

Back at East Perth in 2008, Luke was in good form during the early rounds and looking forward to a Dockers recall when his left knee collapsed for a third time. Faced with yet another reconstruction, many others would have called it quits at that point, but with bloody-minded determination Webster opted to continue. This time, he decided on a LARS (Ligament Augmentation and Reconstruction System) procedure, and the synthetic ligament that was implanted had him back on the field for the last few matches of the year. Even so, by then he had realised that his days were numbered at Fremantle, and he was delisted at his own request when his contract expired at season’s end.

Luke continued playing with the East Perth until 2010, and was selected in two more WAFL representative sides on the way to eventually racking up 107 WAFL games in his much-interrupted career. Barely weeks later, after hanging up his boots for the last time, he boarded a flight east to Melbourne, on the verge of a new career with the Navy Blues.

Sadly, Luke arrived at Princes Park on the verge of some of the most turbulent days in club history. During his time at Carlton the Blues made the finals twice, but also sacked two coaches and picked up a wooden spoon. Webster coached the Northern Blues for three seasons, finishing ninth, eleventh and fourteenth respectively, before moving on in September 2015 when Brendon Bolton took over the senior role.