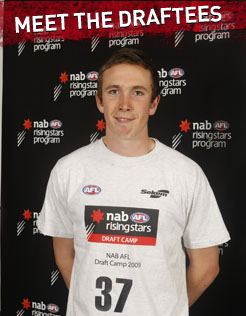 
'Joey' Dare was recruited with Pick 31 of the 2010 Rookie Draft. He was originally from Colac, prior to being picked from the Geelong Falcons.

All players who attend the pre-draft camp are asked a serious of questions, one that was put forward to Joe Dare was whether he understood the meaning of hard work, he reply was, "I am the son of a dairy farmer so I know exactly what it means" (or words to that effect).

He spent two seasons at Princes Park without managing a senior game for the Blues. In 2011, he finished fifth in the Northern Bullants' Best and Fairest award, and was voted Best Finals Player.

Dare would head back to the Western Districts and play for Cobden in 2012 where he was in a 4 way tie for the Maskell Medal which is awarded to the Best and Fairest in the competition. Ironically one of the other three he would tie with was his brother Levi who also played for Cobden. In 2014 Joe Dare headed to Colac where he played in a premiership with the Colac Tigers in the GFL. Dare would later leave the club but came back in 2017 when his brother Levi took over the role as the playing coach for Cobden, the five Dare brothers would be play together again. In 2018 Dare would take up a coaching role at Alvie.