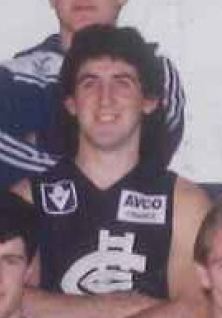 
White was the eldest of three sons of Cliff White, a prominent former player, coach and administrator in the Heathcote District Football League. He grew up playing football for the Mt Pleasant Blues, before being recruited by Carlton’s Under-19 squad in 1987.

During his one season at Princes Park, White played some sensational football at times. A massive haul of 13 goals against Hawthorn, and 8 against Fitzroy saw him promoted to the Reserves team for one game, and he finished runner-up in the Under-19 Best and Fairest at the end of the year. But he didn’t go on with his VFL career, and returned home to Mt Pleasant in 1988.

One of White’s twin brothers; Peter, was just 16 when he won Mt Pleasant’s senior Best and Fairest in 1986. The following year, he too joined Carlton, and went one better than his brother by winning the Blues’ Under-19 Best and Fairest in his first season. Eventually, Peter White played three senior games for Carlton, then also went back home to captain-coach Mt Pleasant to two HDFL Premierships.

Tragically, Peter White, his father, and Peter’s best friend Mark Bell were all drowned in November 1996, when their fishing boat was apparently smashed onto rocks by a huge wave near Port Campbell, on Victoria’s rugged south-west coast. Their bodies were never recovered.