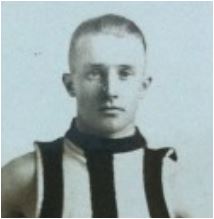 
Edward Richard (Ted) Baker played the first of his 142 VFL matches on a fine Saturday afternoon in July, 1920, when he ran out on to the Junction Oval as second rover for Carlton against St Kilda. Recruited from Wonthaggi, Baker was a quick and skilful terrier of a player, who went on to forge an impressive record at three other clubs after departing Princes Park in unexplained circumstances.

Two years after that one appearance for the Blues, Baker bobbed up at Collingwood and stayed two seasons, but it wasn’t until he joined Geelong in 1927 that his career really took off. In 95 matches for the Pivotonians, Baker blossomed into a star rover renowned for his accurate left-foot stab passing. He became a regular Victorian state representative, and captained Geelong to the 1931 Premiership.

In 1932 he left Geelong to rejoin Collingwood, before he finished off his nomadic football journey with three games for Footscray in 1934. All up, Ted played VFL football for ten seasons, in a career spanning 14 years.

Although he was past the age of 40 by 1942, Baker volunteered for service with the RAAF during World War II, and spent more than three years in ground-based duties on the Australian mainland. He was discharged in November 1945, and lived a long and apparently contented life until his passing at the age of 85, in July, 1986.