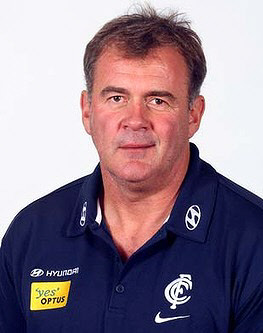 West Australian Mark Riley was an assistant coach at Carlton between 2008 and 2012. One of the few men to have coached at AFL level without having played there beforehand, he was nevertheless vastly experienced and widely respected.

Born in Perth in 1963, Riley was a Carlton fan who played junior football for the Claremont Tigers before a serious knee injury during his teenage years wrecked his prospects. Later, after graduating as a teacher, he began coaching in WA country leagues with the Railways Football Club and the Kellerberrin-Tammin Cats.

In 1993 he was appointed coach of the Claremont Colts (Under-18) team, and took them to a Premiership in his debut season. He also assisted Tiger senior coach Gerard Neesham on the way to Claremont’s victory over West Perth in that year’s WAFL Grand Final. When Neesham joined the fledgling Fremantle Dockers the following season, Riley replaced him as senior coach at Claremont, and the Tigers made a second-successive Grand Final, only to be beaten by East Fremantle.

Season 1995 saw Riley reunited with Neesham at the Dockers, where he stayed for the next five years as a development and assistant coach. Returning to Claremont in 2001, he led the Tigers to the minor premiership and was awarded WAFL Coach of the Year. At the same time he was working on the coaching staff at the renowned Football Academy at Clontarf Aboriginal College.

Meanwhile, on the other side of the Nullarbor Plain, the Melbourne Demons were looking for an experienced assistant for their coach Neale Daniher, and Riley ticked all the boxes. He joined the Demons in 2003, and worked diligently as senior assistant until June 2007, when Daniher abruptly resigned and Riley was thrust into the hot seat in a caretaker capacity. Riley coached the Demons to three wins (incidentally, twice against Carlton) from the last nine games of the year, only to be replaced in 2008 by former Essendon and Port Adelaide assistant, Dean Bailey.

By that time, Brett Ratten had taken over as senior coach at Carlton, and approached Riley to join him. Over the next five seasons, the Blues forged a team that was highly competitive, but wilted too often under finals pressure. So, late in 2012, Ratten was sacked in favour of former Collingwood and West Coast Premiership coach Mick Malthouse. Riley soon departed too, and almost immediately signed on as an assistant with the Gold Coast Suns.