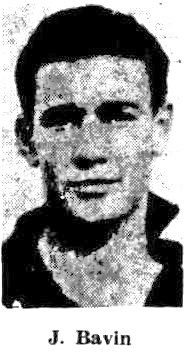 A centre half forward from South Narracoorte in the Kowree Association in 1936, Jack missed the 1937* season after being involved in a motor vehicle accident on January 31. Earlier in 1935 he had won the most brilliant player award in the Boundary District Association.
(Narracoorte Herald March 29 1938)
.* There was a Bavin playing in the Carlton reserves in the latter part of the 1937 season. (same player?)

Wearing guernsey #33, the 183cm Bavin played 5 games and kicked 1 goal for Carlton after first running out in Navy Blue in 1940 as a 23 year old. Bavin came from the South East of South Australia playing for both Narracoorte and Mount Gambier.