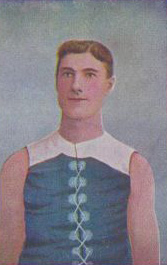 Boyle played 36 games for the Blues as our emerging triple Premiership team was forming in the early 1900's. He was born in Hotham (Nth Melbourne) and recruited from North Melbourne VFA.

Bob Boyle was an umpire in Launceston and in the VFL, he became one of the foundation members of the Umpire's Association.


Robert Boyle began his senior career with North Melbourne, and was on a half back flank in the side's 7.6 (48) to 3.9 (27) grand final defeat of Richmond. The following year saw him cross to Carlton, where he crowned an outstanding debut season by appearing in the centre in the grand final clash with Fitzroy, which resulted in a 24 point win to the Maroons. Boyle entered the 1905 season regarded as one of the hottest prospects in the VFL, and along with wingmen George Bruce and Edward Kennedy he helped give the Blues arguably the most damaging centreline in the competition. In 1906, however, his form fell away, and, after missing the club's ultimately successful finals campaign, he retired at the end of the season having made just 36 VFL appearances. The best of those appearances, however, were sufficiently noteworthy for him to be remembered with respect, not least because he arguably established the tactical prototype which was later developed to such outstanding effect by his successor as Carlton centreman, Rod McGregor.1

1921 April 14
"Bob Boyle, the secretary of the newly formed South Yarra Branch of the A.L.P., is the old Carlton football and League umpire."
(Advocate p3)

Bob 'Skeeter' Boyle tore Henry 'Tracker' Young's (Geelong 1890-1909) 'lucky' pants at Princes Park. Young had worn them for many years and had a superstition about always wearing them.
'Anyway Bob made a grab at Henry and tore the pants. Henry on impulse threw Bob to the ground. Standing over him and glaring down he said,"What did you do that for? I have had these pants for seven years." Skeeter who was nursing his ankle, looked up ruefully and said, "That's nothing Henry. I've had this ankle all my life."
Henry grinned, stooped down and lifted 'Skeeter' to his feet and so the incident ended.'
(Sporting Globe May 17 1941 p6)
This match would have been Round 5, 1905