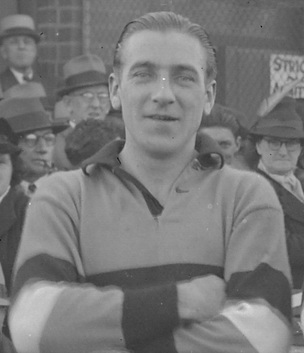 Albert Robert (Bert) McTaggart was born in Williamstown, and was an experienced key forward from VFA club Williamstown who took up the challenge of playing VFL football with Carlton in the early years of World War II. Although he had already volunteered for military service by the time he played his first game for the Blues, he was employed in a reserve occupation. This allowed him to remain in Melbourne throughout the war, and to pursue his football career.

McTaggart was named as 19th man for his debut, when the Blues took on Footscray at the Western Oval in round 7, 1940. The Bulldogs were far too good for a lethargic Carlton team on that windy Saturday afternoon, and they should have won by more than the final margin of ten points. They had ten more scoring shots, but just couldn’t find the big sticks.

In his second match, McTaggart’s career seemed to get rolling when he booted three goals at full-forward in a hard-fought 4-point loss at Princes Park against North Melbourne. But he was unable to build on that good performance, and was sent back to the reserve bench for four of his six other games for the year. When he began 1941 on the wrong side of the boundary line again, he decided that he would be better off elsewhere, and bid the Blues goodbye.

In 1942, Bert headed to the Western Oval, determined to get another shot at elite-level football with Footscray. Bulldog coach Arthur Olliver offered him an opportunity in defence, and McTaggart was a revelation. Over the next four years, he played 59 solid games in a back pocket or at full-back for the Bullies, including the final series of 1942 and 1944.

The best performance of his career was undoubtedly the 1944 first Semi Final, which Footscray lost to Essendon by 49 points. While his team was well beaten after the first quarter, McTaggart single-handedly repulsed attack after attack from his back pocket, and afterwards was widely praised as the best player on the ground.

He was sadly missed by Footscray when he retired after the 1945 season, and twelve months later, took up an appointment as coach of Tasmanian club Clarence. Having just been admitted to the expanded Tasmanian Football League, the Kangas were embarking on a journey that would eventually make them one of the Apple Island’s power clubs. McTaggart was the man they turned to for guidance, and he set them on their way.