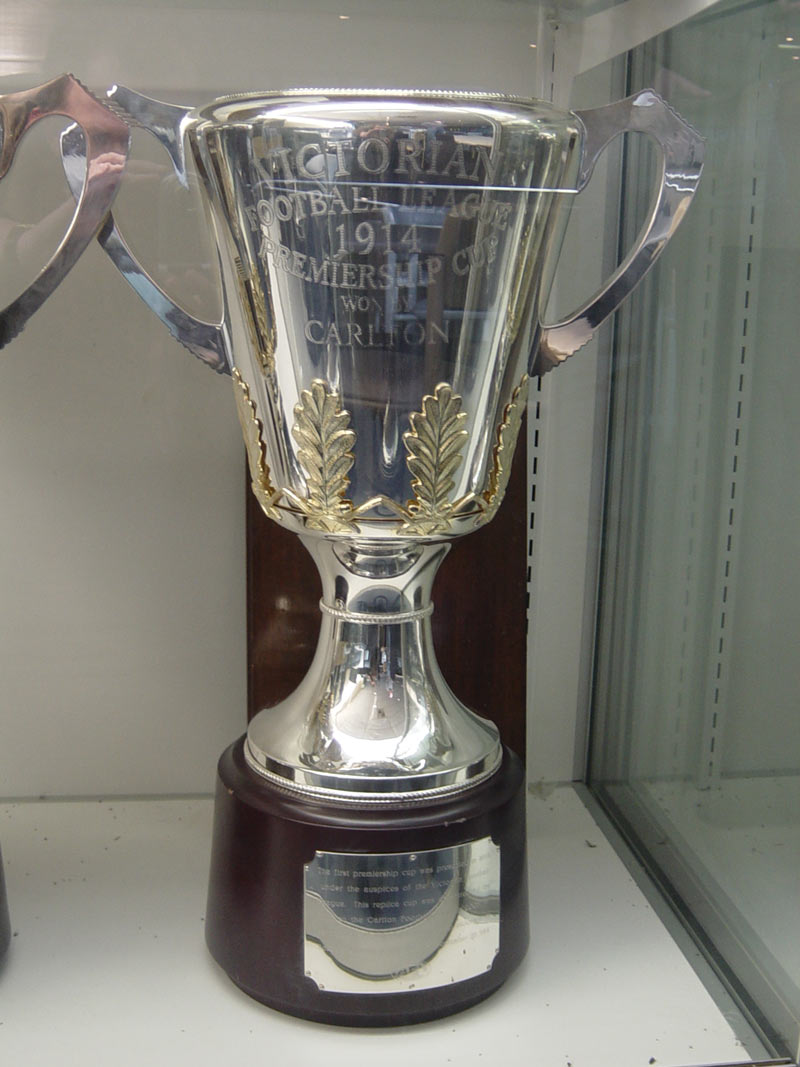 "Carlton has passed through the maelstrom of a reform upheaval, and the energy of the successful reformers is unabated. Never in the history of the club have there been so many recruits out of all who played last year, and who now wish to play. The selection committee have retained 34, and this number will still be further reduced in a few days. No fewer than 13 of the men who played last year are missing from the list, viz:- Marchbank and Bruce (who have retired) Gotz, Cameron, Mills, Moran, Farsman (Dave Earsman*), Gibbons, Rogers, A. O'Donnell, Curtis, Birmingham and Bacquie. There are hosts of applicants for these vacanies. Some will be kept on the training list, others will be kept in reserve with the Carlton District team." Trove; Argus April 20 (p7) 1914
.*Farsman is a misprint, Blueseum correction.


Carlton won our fourth VFL Premiership in 1914 - our Jubilee (50th) year - defeating South Melbourne in the Grand Final by 6 points. The Bloods had four more scoring shots than the Blues in the decider, but the final scores were Carlton 6.9 (45) to South Melbourne 4.15 (39). Amazingly, half of the winning Grand Final side were first year players!

The Blues had an indifferent start to the season, with two strong wins (against University and Melbourne in rounds 3 and 6), two draws (with Collingwood and South Melbourne respectively in rounds 1 and 4) as well as three losses in the first seven home and away rounds. The team also suffered an embarassing loss to a Goulburn Valley representative team in a mid-season match at Tatura.

Sitting seventh on the ladder after round 7 (three and a half games behind leader South Melbourne) the Blues went on to win all of their remaining home and away games to finish six points clear on top of the ladder. Carlton's form wasn't as impressive as that sounds however, as six of those 11 wins were by less than 10 points - rounds 9, 10, 11, 14, 16 & 18.

A solid victory over Fitzroy by 20 points in a low scoring Semi Final started our finals campaign, only to be followed by a loss to South Melbourne in the Preliminary Final. But having finished the season on top of the ladder, the Blues had earnt the right to challenge South Melbourne again the following week in the Grand Final and upset the Bloods in a thrilling and willing contest. What made Carlton's success all the sweeter was that 9 of the 18 Blues who took the field were first year players. The club had done the unthinkable in the VFL, by blooding numerous new faces and still claiming the ultimate prize.

At the end of the 1914 season - on the brink of World War 1 - the University Football Club ceased to exist when it merged with Melbourne after 51 consecutive losses.

The Leader's reporter (May 30) at the Carlton vs Fitzroy match had this to say about the ground;
"Less than a score of years ago the Carlton ground was a tip for garbage, with a swimming hole, sometimes turned into a lethal chamber for dogs in the low corner. Good football gates and judicious management have turned the reserve into a thing of beauty and a joy for ever, with it's setting of spacious park lands. The latest improvement is a smart white fence around the arena, to which the ground management, warned by the unseemly melee of a few weeks ago, have affixed notices threatening condign punishment to any barracker, turbulent or otherwise, who wishes to display his antics on the green sward.
Scattered around the ring on the inside of the fence one noticed at different spots stalwart men in blue ready and willing to carry out the behests of the authorities.
The capacious grand stand, also, is the best in the suburbs, and it's strong, light and graceful design is a credit to Mr. F. Stapley, the club's architect. The accommodation for the crowd at Carlton is the most spacious in the metropolis, as the stand and the great bank right round the ground can provide a good view for over 50,000 persons." 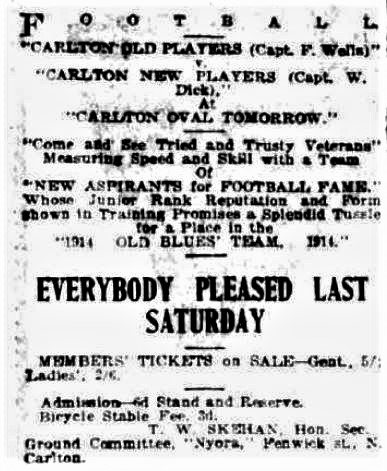 
vs Golden Point on the Eastern Oval Ballarat

April 18
Best of the recruits, (12) Andrew (Collingwood) wing, Leehane (Carlton) back, "Dubs' Daykin (Bendigo) ruck and back, Sharp (a little chap, who played a game last year roving), Baldie, a tall ruckman from Trafalgar, Gibb a big ruckman, brother of the Collingwood player, McKenzie, from Tasmania, who won in the centre, Caldwell, Wilton, Evans, Rowe, and E. V. Brown (the Ballarat rover and half back)
Carlton won by 25 points
Carl; 7.15.57
CDist; 4.8.32

Not Carlton F.C. related, but a Record Goal Scoring Spree

A remarkable score by Carlton Congregationalists against Howe Crescent, a South Melbourne church team on May 09.
Howe Crescent had won their last 25 games.
Carlton Cong. 56.34.370 to Nil
20.5 kicked in the last quarter! (The Record, May 16, 1914)

Our Game In America

"Mr. J. Smith, the old St.Kilda player, football umpire and coach, is (says the Melbourne Herald) endeavouring to arrange for a visit to America of teams of Australian footballers, and is communicating to the league on the subject. The details of the proposal have not been disclosed, but we have learned that several wealthy citizens have been approached, and have expressed opinions favourable to the scheme, the success of launching which will probably depend upon the points whether the Commonwealth will agree to financially support it as a big advertisement for Australia.
Estimates have been prepared, and it is calculated that the trip would cost from 8,000 to 10,000 pounds. The idea is that exhibition games shall be played in connection with the Panama Exhibition, and afterwards in different parts of America, England, and France. The Australian game is not unknown in America. It was transported there as the result of the visit of Australia some years by American schoolboys, who were coached in Melbourne by Mr. Alec Hall, whom they regard as a marvel in handling the ball."


Safest, Fastest, and Most Scientific

The following interesting paragraph is taken from Recreation, published in San Francisco:- "Fieldball so called in America and known in Australia as Australian football, is proving popular in local grammar schools, and the Washington School has won the championship in the tournament recently held. The Australian safest, fastest, and most scientific game on earth, and the experience here bears out that statement."
(Trove: Observor Adelaide May 16 1914 p19)