Carlton began the year with this controversial loss to South Melbourne by 27 points at Junction Oval. Three players made their debut, including Herb Turner.

The Blues began 1944 in disappointing fashion with a 27-point loss to South Melbourne, and caused a near-riot. During the match, Carlton ruckman Ron Savage crashed through South Melbourne’s 1940 Brownlow Medallist Herbie Matthews with a ferocious tackle that broke one of Matthews’ legs and sidelined him for much of the year. The field umpire saw nothing untoward in the incident, but sections of the crowd believed that Ron had deliberately injured their star centreman, and were baying for blood on the final bell. In alarming scenes, a mob surrounded the Carlton dressing rooms for an hour after the game, and Savage needed a police escort to get him to the nearby railway station in safety.

This loss saw the Blues in 9th place with a percentage of 69.3 after the first round, but a spate of wins to follow would shortly see us right up top. 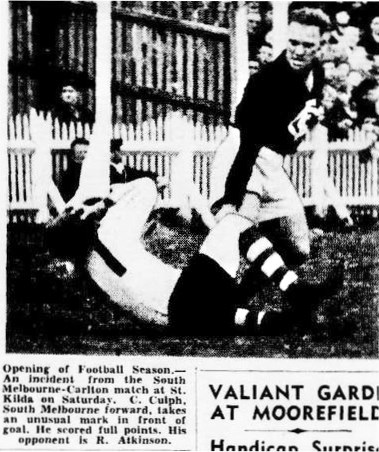