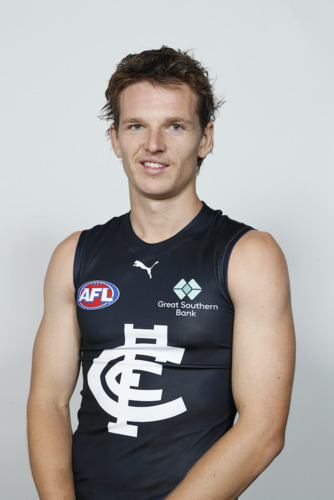 Boyd was recruited to the Blues in the 2021 Mid Season Draft. From Spotswood, to Footscray and now IKON Park. It’s been a unique journey to the elite level for Carlton’s newest Blue Jordan Boyd, selected in the 2021 NAB AFL Mid-Season Rookie Draft on Wednesday night. Playing only two games of representative football in his life and after being overlooked throughout the elite talent pathway, it was all about trusting the process for Boyd as her pursued an AFL career. Unlike so many of his AFL contemporaries, Boyd didn’t feature at NAB League level for the Western Jets, and was instead featuring in the Western Region Football League before Footscray’s VFL side came calling. “A couple of years ago I probably thought I’d made it playing local at Spotswood,” Boyd said. “Then was fortunate enough to get a gig at Footscray and thought that I’d really like to try and push even higher. “I’ve played one game of rep football in my life. That was in 2019 and then I was fortunate enough to play in the Vic Metro U/25's team in 2019 for seniors: they’re my only two rep games I’ve ever played.” That 2019 year was a significant season of progression for Boyd, who went from a train-on player for Footscray’s VFL side before cementing a spot as a forward. With 2020 ruled out, Boyd slotted straight back into VFL life in the first half of 2021, not missing a game for the undefeated Bulldogs and intent on giving himself the best chance at an AFL berth. But he never thought it would come this quick.

“It’s pretty insane. I never thought that it would really happen to be honest. It still hasn’t quite sunk in yet: it’s been a hell of a day and a bit so it’s still pretty surreal to me,” he said. “On Wednesday I was just trying to stay a bit relaxed: I actually went for a kick in the afternoon and then completely tried to forget about the time. I did that pretty successfully and then I was in my room just watching it online and my family were in the main room just watching it. “I wasn’t really paying too much attention around pick No.20 because I was pretty nervous, and then I just heard Dad started yelling out and I looked down and my name was there.” Boyd is viewed as a high forward who can use his pace and foot skills to damaging effect in the front half, but he’s added another string to his bow so far in the VFL season. With the likes of AFL-listed Mitch Wallis, Cody Weightman and Mitch Hannan among others in the VFL forward mix for the Bulldogs, Boyd was thrown into the back half. The 22-year-old embraced the challenge, showcasing to Carlton’s recruiting staff his flexibility and ability to adapt to a new challenge. “It’s been an interesting one. I trained all pre-season in a forward line, midfield-wing role and it came to Round 1 and they said, ‘look we’re going to have throw you down back’,” he said. “But I actually really enjoyed it down there, it’s been a challenge early trying to learn everything and all the different positioning, but I really embraced that. “I’m happy to play at both ends of the ground or wherever… I’m just happy to be on the ground to be honest!” Eagerly awaiting the return of the squad currently based in Sydney, Boyd is looking forward to meeting his new teammates. “It’s an honour to be part of such a big club and big fan base, so I’m really looking forward to meeting everyone and getting to work.”

The mid-season draft was held after the conclusion of Round 11 of the 2021 AFL season on 2 June. The draft was only open to clubs with inactive players on their list and vacancies available, such as long term injuries or retirements. The Blues utilised this due to David Cunningham's long-term injury.