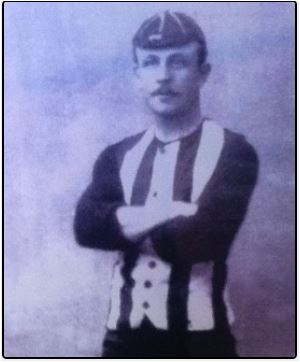 Left: Ernie Ashton played 55 games and scored 11 goals with Collingwood 1892 - 1895.
Ernie was a follower and a policeman by profession.
Right: Ernie is pictured in the Carlton team that played Geelong on the MCG June 20 1896.


According to "Origins of Australian Football Vol. 5" (p42) ex Collingwood player Ernie Ashton played six games and scored one goal for the Blues in 1896.

Recruited in 1890 from Carlton East and North Park.

1896 The Herald reports that Ernie Ashton late of Collingwood will play for Carlton against Essendon on May 9. Is this the same person?

(The Encyclopedia of AFL Footballers has an entry for Ernie Ashton who was born 7 July 1883 and was recruited from Gaffney's Creek, played 1 game for Blues in 1904 when he was 21 years of age. So this Ernie would have been too young for 1896)

1896 Ashton was named as among Carlton's better players in the drawn game with Geelong at the M.C.G. on June 20.

1896. Ashton (a Carlton 'topliner') one of five Carlton players suspended from the St Kilda game.
He played the next four Saturdays, then the suspensions were applied.