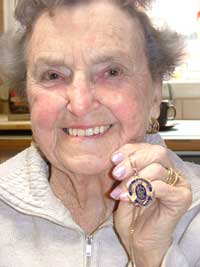 On the 60th anniversary of what was an historic Brownlow Medal count for the Carlton Football Club, Jean Deacon, the wife of the Blues’ first medallist the late Bert Deacon, has again called on the community to assist with the recovery of the “most sentimental possession I have”.

Jean, now 85, still harbours hope that Bert’s 1947 medal, stolen from her home on New Year’s Eve in December 1991, will finally be returned to its rightful owner.

Thankfully, she has in her keep a replacement medal, struck when the then chief executive commissioner of the AFL, the late Alan Schwab, heard of her plight. Schwab, who forged a friendship with Deacon when he (Schwab) was a secretary at Richmond, personally handed the replacement medal to Jean.

"It would be lovely to get the medal back, but I won't be holding my breath. I reckon that whoever grabbed my purse didn’t really know what he was taking. The medal probably didn’t mean anything to him," Jean says.

Deacon’s ‘47 Brownlow, together with two other medals won by the great Carlton centre half-back, were in a handbag containing $350 stolen from a bench in Jean's kitchen. For six years she had carried the medal in an envelope, tucked in a wallet within her handbag.

"The medal was a once in a lifetime thing. When someone took it the bottom fell out of everything," she says.

Jean vividly remembered the circumstances surrounding Bert's historic Brownlow victory in September ‘47. That night, she, Bert, and their eight-month old son Brian were listening to a broadcast of the count from the comfort of the loungeroom at their then home at 2 Hawker Avenue, Preston.

"We had some friends, Jack Costello and his girlfriend Carol, who ran the Preston Hotel in High Street, who also came around to listen. When Bert's name was announced the visitors went out to their car and returned with beer and sandwiches, and by the time reporters turned up there was a beer and sandwich waiting.

"The other thing I remember that night was that Bert’s brother-in-law, who lived in Coburg at the time, rode his bike across to shake hands with him.”

Bertrand John Deacon was born in Northcote in 1922, before relocating to Preston with his father, a prominent local footballer. 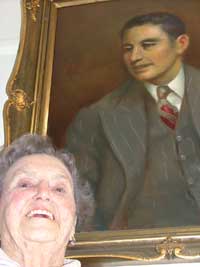 In 1942, Lance Corporal Deacon was posted to Alice Springs and later Darwin. Whilst in “The Alice”, Bert met Jean, at that time working with the Allied Works Council. “We got married on the day of the 1945 Preliminary Final against Collingwood,” Jean says, “and we had to put our wedding off for a couple of hours because of the footy.”

Deacon represented Carlton in 106 senior matches between 1942 and 1949, including the famous "bloodbath" Grand Final against South Melbourne in 1945 and the last gasp Grand Final victory over Essendon in ‘47.

Today, Jean remains an active member of the club through its network of Carlton women.

Jean says that the medal meant a lot to her late husband “and it would mean a hell of a lot if the original was recovered . . . “then I’d have a medal for each of my two boys”.

On Monday night, Jean and her other son Bob attended the Brownlow Medal count. Together they sat with Nell Hutchinson (the widow of 1952 and ’53 Medallist Bill Hutchison), Billie Clegg, the widow of South’s 1949 medallist Ron Clegg) and their respective sons.

Ratten to fire off handball against the Eagles.