The White Pages tell us that Smith remains the most common surname in Australia. In Carlton’s White Pages - otherwise known as the Blueseum - there is indeed a fair spread of Carlton Smiths with 7 in total, including the Smith who changed his name mid-way through his Carlton career, and 8 if you include Smith-hyphens. All in all, that comes down to 8 Smiths out of 1107 gentlemen* to proudly wear the Navy Blue in over 110 years of VFL / AFL football. In a surprising twist to the role of the Carlton Smiths, the total games tally of all 8 Smiths comes to a miserly 62, at an astounding average of just under 8 games per Smith. Whether this should act as a recruitment tool in future only time will tell, but this amazing statistic and the backgrounds of the respective players was considered worthy enough for some attention at the Blueseum.


1. Barry Smith, 6 games, 1960
Very little is known about the first Smith. Originally from Tatura near Shepparton (Victoria) - the same town as fellow Blues Paul Payne, Roy Dick, Frank Pritchard, Peter Warburton and Archie Wilson - Barry would kick 7 goals and 10 behinds in his 6 games in Navy Blue. Interestingly, Barry would kick 5 of these goals – half of our entire goal tally – against Geelong in Round 6, 1960, his second game.


2. Peter Smith, 15 games (Carlton; 38 overall), 1968-1970
Peter Smith was the son of Melbourne Legend Norm, and came over from Melbourne to Carlton two seasons after Ron Barassi became Carlton’s Captain-Coach. The relationship between Barassi and Smith was long-term, with Barassi having lived with the Smiths growing up. 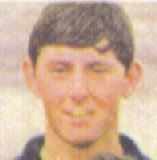 Smith was a key position forward / defender, generally playing at either Full Forward or Full Back. On one famous day in Round 16, 1970, Smith kicked 13 goals for Carlton’s reserves against St Kilda. After this effort, Smith is said to have cheekily remarked to Alex Jesaulenko, senior Full Forward at the time, that Jezza’s position would be his for the next week. Jezza responded with 9 majors for Carlton’s seniors in what was Jezza’s (and Carlton’s) only Centurion Year, and although Smith was promoted to the senior interchange the week later, it would be his last game at senior level.

At the end of the season in Round 22, 1970, playing in the Reserves and knowing his time at Carlton was up, Smith kicked the football into the top deck of the old Southern Stand after the final siren had sounded in his final game.

3. Gary Smith / Lawson-Smith, 7 games, 1970-1971
Gary Smith began his Carlton career as a Smith but finished as a Lawson-Smith, one of two Carlton players to change their name in 1971 (the other was Andy Lukimitis who became Andy Lukas, apparently to help the footy commentators of the name pronounce his name correctly!). Lawson-Smith married at the start of 1971 and changed his name (Lawson was his middle name) at the time.

Gary’s story involved 7 games over 1970-1971, across those two surnames. Gary actually tried to begin his Carlton career a little earlier, coming over from Central Districts at the start of 1969. But a clearance wrangle would ruin his chances, and he had to stand out of football waiting for a clearance from South Australia, actually becoming the senior team runner for the year instead.


4. Tony Smith, 2 games, 1974
Tony ‘Joey’ Smith played 2 consecutive games in Rounds 20 and 21, 1974. In a spooky twist, these are also the same identical consecutive fixtures that Carlton’s most recent Smith, Jesse, managed in 2006. Tony’s games were under Captain Peter ‘Percy’ Jones, after Nicholls’ retirement earlier in the year, and Vice-Captain Robert Walls was out injured.

Smith was recruited from Natte-Bealiba in Carlton’s zone in the Ballarat area. He had come through Carlton’s Under 19’s and Reserves, largely playing on the wing. In 1972, Tony had won the Reserves 'Mrs. Jean Cook Most Improved' Award and in 1973 he was equal 5th in the Reserves Best and Fairest with Rod Ashman and John Trueman. Tony would be the first Smith to wear the #41.


5. Jeremy Smith, 1 game, 1993
Jeremy Smith was a young Tasmanian recruit who would play a single game for Carlton, and as such, become officially Carlton’s least played Smith.

Jeremy was originally picked up in 1989, came over in 1991, delisted at the end of the year but re-drafted in 1992. After spending another year on the list, Smith was given his go against the Bulldogs in Round 8. The Blues would go down, but Smith – the second Smith to wear the #41 - would kick a goal off his trusty left foot from about 50 metres out to celebrate his only game in style. Smith may be better remembered for having to wear a ‘Phantom of the Opera’ style mask after cracking his cheekbone in the Reserves.


6. Lindsay Smith, 3 games, 2002
Lindsay joined Carlton at the end of Season 2001 after a brief stint with North Melbourne under Denis Pagan. In a complicated swap of ruckmen and draft picks, Carlton would recruit both Corey McKernan – who went on to win the Best and Fairest that year – and Smith. Smith, one of the few league players to be born on February 29th, raised the hopes of Carlton fans with 6 goals in the lower levels versus the Bendigo Diggers.

Unfortunately, Smith’s high leaping ability (if only he could have pulled some down!) was not enough to maintain his spot on the list. Incoming Carlton Coach Denis Pagan would move Smith on yet again, sacking him from the Club he coached for the second time in a little over 12 months.


7. Jesse Smith, 2 games, 2006
Jesse Smith was a hard-at-it midfielder at Carlton for 2005 – 2006. The third Carlton Smith to wear #41, Smith was recruited through the Rookie Draft from the Calder Cannons and managed to stay in the minds of selectors through much of his tenure given his ability to find the hard-ball.

A horrific bench-press injury at the start of the 2006 pre-season would tear his pectoral muscles from the bone, requiring surgery. But, with hard work and perseverance, Smith was promoted for Rounds 20 and 21 of 2006 (as above, the same fixtures as Tony Smith). Unfortunately for Smith, it was a case of blink-and-you-miss-him as he was afforded minimal game time and a minute chance to shine in his 2 games.

Smith later moved to West Adelaide in the SANFL.


8. Bruce McMaster-Smith, 26 games (Carlton; 54 AFL), 1962-1964
The history books tell us that there was another Blue who bore the name Smith at Carlton, but Bruce McMaster-Smith was a ‘hyphen’ in both surname and nickname. McMaster-Smith played 26 games between the years 1962 and 1964, winning Murie Cups (Second place in the Reserves Best and Fairest Competition) at both his original Club, Fitzroy, and also at Carlton.

The diminutive McMaster-Smith, who only stood at 169cms, polled 10 Brownlow Votes in 1962 to be the equal top Blue in the Umpires eyes with Peter Falconer - despite being almost blind in one eye due to an industrial accident.

In 1965, McMaster-Smith moved on to the emerging St Kilda team and would kick the winning goal for the Saints against the Blues at Moorabbin in Round 11. McMaster-Smith would play 15 games in 1965, including the Grand Final, creating the historical rarity of a player leaving Carlton to play in a Grand Final for St Kilda.


The Carlton Smiths may have only provided 62 games in Navy Blue between them, but they have provided a number of intriguing stories to remember them by. From Lindsay the ruckman, to Peter, Bruce and Barrie the forwards, Jesse the midfielder, Jeremy and Tony the wingmen and Gary the back flanker, the story of the Carlton Smiths has now finally been put to print – even if their playing exploits may not have been.