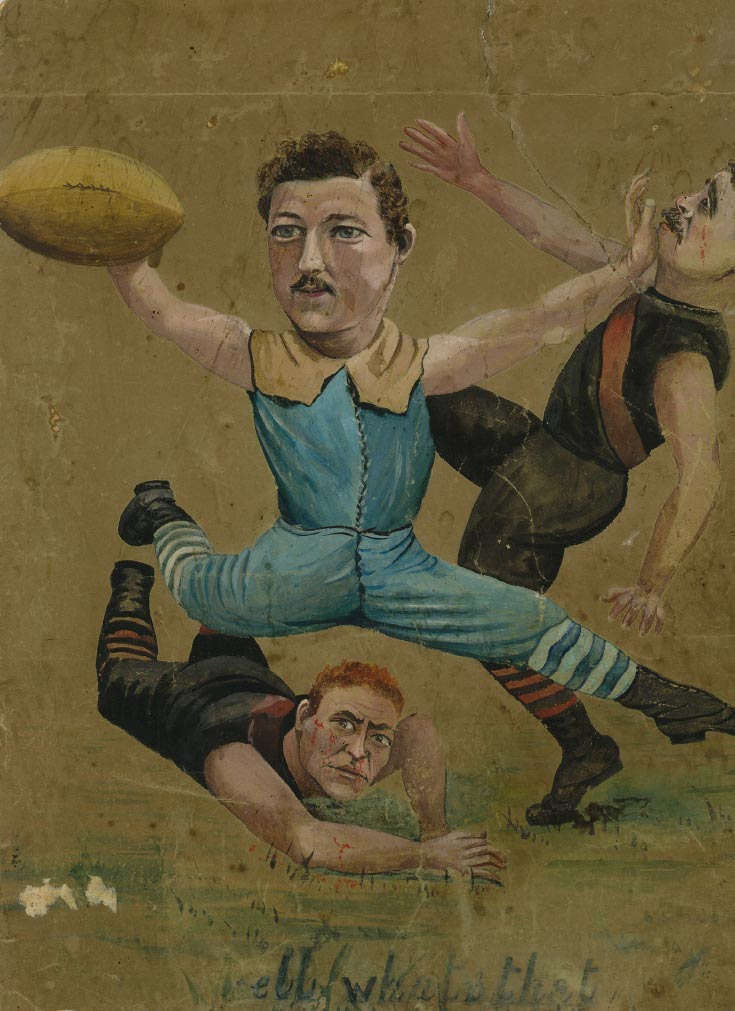 The painting depicts an immaculately-groomed Balharry, sporting the original Carlton strip with lace-up guernsey and chamois yoke, fending off two Essendon opponents to win possession. The painting, originally titled “Balharry Comes Through”, was completed by an unknown artist.

The Essendon player on the end of Balharry’s good old fashioned “don’t argue” is believed to be Albert Thurgood.

The identity of the other hapless Essendon player is unknown.

The painting has for many years been in the keep of 14-game former Carlton footballer Frank Munro, who has generously donated it to the club for future display. According to Munro, the painting once hung on the wall of a Carlton hotel run by Balharry himself.

“The picture was souvenired by a patron when the hotel was delicensed around 1923,” Munro said.

“It was given to my father, Jim Munro, around 1960, when housing at the Elgin Street end of Station Street was being demolished to make way for early housing commission units. Residents were having a clean-up and one resident, knowing my father was connected to the club, gave him the drawing.

“The artist was said to frequent the pubs and would do drawings of patrons or staff in return for free drinks. In this case the drawing was done on the back of a calendar. The day dates could give a clue to the year.”

Balharry’s older brother, James Fenton Balharry, was an assistant secretary at Carlton in 1898 when he was coaxed out of retirement to play one senior VFL game for the Blues - against Fitzroy, in round 16 of that year.