Max Howell, the 12-game Carlton centreman who joined the Blues on the end of their premiership season of 1947, has died at the age of 84.

Howell, the Benalla boy who appears in the club’s official portrait of the ’47 Premiership squad, first broke into the Blues’ senior line-up in the seventh round of ’48.

Named on a wing, he got his chance against Melbourne on the MCG after the ’47 Premiership player Fred Fitzgibbon was ruled out with injury. This was Norm Smith’s 200th senior appearance for the Redlegs who duly won by 51 points despite the best efforts of Carlton’s Ollie Grieve on the last line.

Howell managed to hold his place for another week, before Fitzgibbon was declared fit again for round nine. He returned to the reserves, but won a recall to play in the back pocket in three more games mid-season.

Howell managed just three senior appearances in 1949, each as 20th man, then was assigned the roving role by Senior Coach Perc Bentley in the opening round of 1950, once again against Melbourne. He kicked his one and only goal for the Blues that afternoon.

At Princes Park the following Saturday he was part of the winner’s circle after Ray Garby and Ken Baxter each booted five goals in a high-scoring mid-table clash against North Melbourne. Howell lined up at half-forward in that one, but didn’t trouble the scorers. 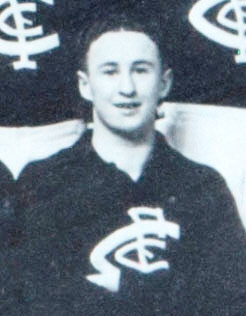 That would prove to be Howell’s last match for Carlton, and he promptly pursued his career with VFA outfit Oakleigh.

The former Carlton Premiership ruckman and coach Ken Hands, a lifelong friend of Howell’s, conceded that Max was “an in an out one” in his seasons as a player at Princes Park.

“I couldn’t tell you much about Max’s time at Carlton, because he was there all too briefly in the late 1940s,” Hands said. “I know that he went to Oakleigh after he couldn’t cut it at Carlton and was a premiership player there. For a time he also worked at KG Luke’s as a metal spinner before going door-to-door and for many years he was a keen golfer.

“Max was a terrific bloke. He was always spot on - he was never any different. Over the past two years he was in hospital more than anywhere else, but he never gave up and he fought all the way.”

Max is survived by Mavis, his wife of 61 years; sons John and Peter, daughters-in-law Karen and Dianne; and seven grandchildren whom, according to a death notice placed by son John, he brainwashed into barracking for the mighty Blues.