If the information currently available regarding events leading up to Carlton’s clash with the Fremantle Dockers at Subiaco Oval on Sunday, May 26, 2002 is correct, then this was surely one of the more bizarre moments in club history. Why? Because in the lead-up to that game, triple Olympic gold medallist Shane Gould delivered a motivational speech to the struggling Carlton team – during which she presented every player in attendance with a wooden spoon!

Gould was one of Australia’s greatest athletes; a swimmer of phenomenal talent who became the first woman to hold the world freestyle record at every distance from 100 metres to 1500 metres. She achieved that remarkable feat in December 1971, just three weeks after her 15th birthday. At the 1972 Munich Olympic Games, she won gold in the 200 and 400 metre freestyle, and the 200 metre individual medley – setting new world records in each. She also collected silver and bronze respectively in the 800 and 100 metre freestyle. Gould retired in 1973, aged just 17, but during her brief career she had become one of the legends of the sport. 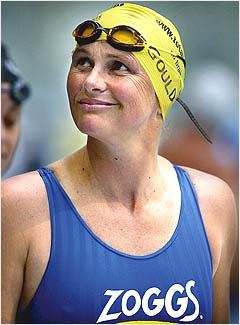 Some thirty years later, as part of her professional calling, she was asked to give a talk to the Carlton team preparing to fly to WA to take on the Dockers. At that stage of the season, the injury-ravaged and somewhat dispirited Blues were languishing at the foot of the AFL ladder, having won only one of their first nine games and trailing second-last St Kilda by 6 points. The Blues were unbackable favourites to collect the club's first wooden spoon in 104 years of VFL/AFL football, and the shame of that prospect was weighing heavily on every member of the team.

The previous Sunday, Adelaide supporters (and sadly, others wearing navy blue) had thrown spoons onto Optus Oval in front of the players’ race during Carlton's 56-point thrashing at the hands of the Crows. Seeking some sort of spark to lift his team, Carlton coach Wayne Brittain was hoping that an address by Gould prior to the last training session at Princes Park would turn things around. Sadly, it appears to have had precisely the opposite effect.

Gould began by handing every player present a cheap wooden spoon that she had purchased on the way to the ground. Then she told them to accept their 16th-placed position as a character-building exercise, and to see the humour in it. She suggested that each player should paint or decorate their spoon, or even cut a notch in it for each loss. She drew a parallel with Carlton's position on the AFL ladder to her disappointment at finishing third in the 100 metre freestyle at Munich, saying she had expected to win 5 gold medals but had to be content with three. She also said that finishing third in her pet event – the 100 metre freestyle, “taught her a lesson in how to lose,” and that the players should separate the performance from the performer. “It's not you who is useless, it was the performance."

Not surprisingly, the general response by those present was less than supportive, and several senior players who had not been in the team thrashed by Adelaide were vocal in their disapproval. Afterwards, Gould said she was aware that not all the players took the wooden spoons in the spirit they were given, and that yes, perhaps her ideas were more attuned to individual, rather than team sports.

That weekend, Carlton lost to Fremantle by 28 points, and 12 weeks later, finished on the bottom of the ladder. Wayne Brittain promptly lost his job, and from that time on, motivational speakers at Princes Park have been very, very carefully selected.