Harry Dern, a backman in 19 senior matches for Carlton through the early 1950s, has died at the age of 79.

Dern, who wore the numbers 39, 32 and 6 over the course of those 19 matches, once earned Essendon’s champion full-forward John Coleman as his opponent. According to Dern’s son Peter, “The old man was telling a story not long ago about when he was playing in the seniors against Essendon, and someone put up ten quid for whoever could keep Coleman to the least number of goals”. 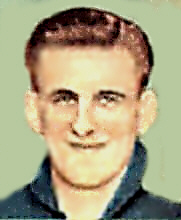 The eleventh of 12 siblings, Henry Lindsay Gordon Dern was born in Newport on May 20, 1929. After being recruited to Carlton from neighbouring Spotswood, Dern emerged with the award for Carlton’s most consistent player in the reserves in 1949.

Dern broke through for his first senior match in the fourth round of 1950, against Richmond at Princes Park. Named on a half-back flank, Dern played his part in a hard-earned 11-point win for the Blues.

The following year, Dern, as reserve grade vice-captain, played a significant hand in Carlton’s hard-fought premiership victory over Essendon. Together with Bill Milroy, George Ferry, Ken Aitken, George Stafford and Doug Beasy, the left-footer was named amongst the best Carlton players in that contest.

Dern, was also runner-up in Carlton’s ’51 reserve grade best and fairest award, an award he took out the following year. He was later named captain of the reserve grade team in 1953, but was a late withdrawal for the ’53 Grand Final.

Peter said that his father, after parting ways with Carlton, completed coaching stints in such rural locales as Pyramid Hill, Tatura and Kyabram.

But Peter, who is employed in hospitality at the Western Bulldogs, said his father remained true Blue throughout his life and often talked about the old Carlton days.

“Dad was always loyal to Carlton and he used to go to a few games. I used to barrack for Collingwood just to stir him up,” Peter said.

“He was a good bloke, an all round nice guy.”

Dern died on January 24, just four months after the passing of his wife Patricia. He is survived by their three children, Cheryl, Susan and Peter.