Hannah is pictured in the Carlton Cricket Club photo as a member of the World Record scoring team of 1895-96, Carlton scored 922 runs in Feb 1896. 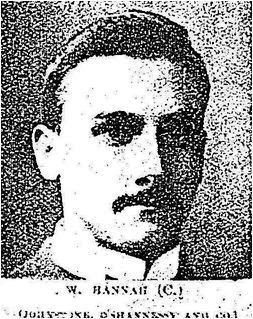 1892 September 20
William Hannah was the captain of Carlton's Second Twenty team.
In court, he was fined £10 or three months' in gaol for insulting behaviour.
The Traralgon Record said;
"He was one of the crowd who rushed the ground on Saturday last, when some disgraceful conduct took place."
This ground invasion took place after Carlton's senior team lost to Geelong at Geelong on September 17.
Hannah had assaulted the umpire J. Shaw and also the Geelong captain Houston, who had come to the umpire's assistance.

"At the Geelong police court this morning W. Hannah, captain of the Carlton Football Club Second Twenty, was charged with insulting behaviour at the Geelong Oval on Saturday last.
The evidence throughout seemed very weak, but the bench caused a sensation in Court by fining the accused the highest penality of £10, or three months imprisonment.
Notice of appeal has been given."

1893 May 20
The VFA Permit Committee grants William Hannah a clearance to Fitzroy.

W. Hannah was a life member, and president/chairman of the Fitzroy Football Club 1931 - 1932. Same person?