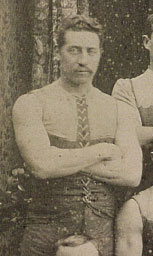 1874 Difficult to handle in a tussel.

1875 The little we have seen in eminently satisfactory.

1876 Received a gold locket from the club.

W Goer; fully deserves the encomium of being one of the best backs in the colony; in this position his rare qualities have done the club great service.
(The Footballer 1878. p31)

1879 Is still one of the truest and best of back players; cool, unique at dodging, and with plently of dash when required; of great value to his club.
(The Footballer 1879. p29)

1880 Interstate representative and vice captain, "his wonderful defence as a back player has excited alike the admiration of friend and foes" and one of the best Carlton men for the 1880 season.

1881 (Vice captain) is truly a football veteran in the active sense, keeps up his brilliant style of play in a wonderful manner, somewhat weakened the Club's defence in his desire for forward, in lieu of what he has few compeers-back play.
(The Footballer 1881. p23)

1883 April 14
Australian Town & Country Journal (Sydney)
"W. Goer, captain last season of the Carlton Football Club, Victoria, has become a resident of Sydney, and as he is one of the 'finest back men,' his presence should be of great service to any club to which he elects to play with."

1883 May 26
Reported in the Sydney paper the Australian Town & Country Journal, that W. Goer "the brilliant Carlton player" has joined the Sydney Football Club.

1886 22 May
W. Goer captained New South Wales at the M.C.G. in the intercolonial match against Victoria.

1888
Billy Goer returned from Sydney, & resumed playing with the Blues.
The Australian Town & Country Journal said of the Sydney Football Club this year;
"This falling off of play is, I think, easily accounted for. The team is almost the same as it was in it's former years, with the exception of it's late captain, W. Goer, who in my opinon was the sole cause of the Sydney Club's success for such a length of time. No man in the club knew more about the game than he did. Up to every move and change in the tactics of it's opponents, he was always ready for any emergency, and his own dashing play would infuse life into his companions, which made them play whether they would or not. But despite the excellencies of this fine player, it must be admitted that he had the power over umpires which no other player possessed. All those officials apparently treated him with far more leniency than they did other players. This, added to his judgment, helped the metropolitan team to many victories. But now that the ruling spirit has gone back to Victoria, the members of the club appear to be at sixes and sevens."

1888 June 19
The Carlton Football Club arrived in Launceston enroute to Hobart.
The Launceston Examiner said of Goer (they called him Gore);
"Among the prominent members is Mr. W. Gore/Goer, a thorough veteran in the world of football.
Mr. Gore/Goer has been taking an active part in the game for upwards of 20 years, having been 17 years a member of the Carlton Club, and from all accounts is at the present moment as good as ever."

1923 July 6 (p4)
"Old Boy" of The Argus wrote about the best footballers to have played and mentions W. Goer among the Carlton champions of the early 1880's.