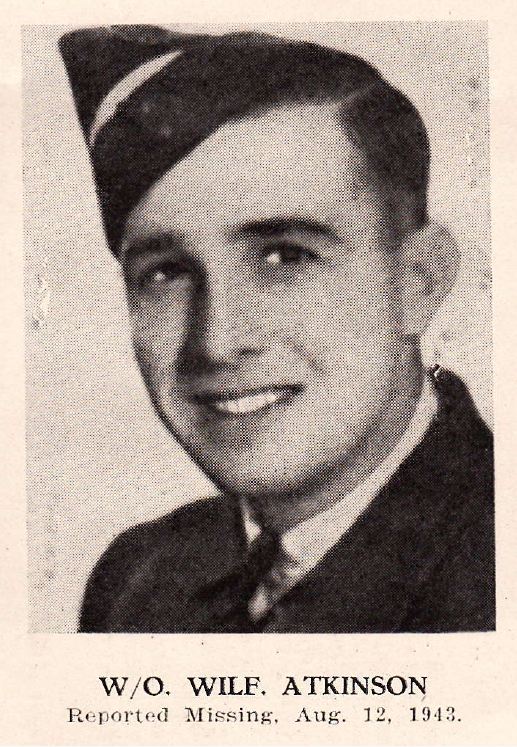 One of the hundreds of league footballers who volunteered for active service in World War II, Wilf Atkinson played his only game for the Blues shortly before being sent overseas in 1942. Born in Armadale, he had been recruited from Sandringham, after originally playing for Hampton and played alongside future Carlton captain Bob Atkinson, to whom he was not related.

In that one appearance, wearing guernsey number 7 for Carlton, Wilf played in the centre against South Melbourne at Princes Park on May 16, 1942. Amidst wartime deprivation of all kinds, the Blues unveiled six debutantes that day, but the Bloods controlled the game from the first bounce and ran out comfortable winners by 40 points.

Earlier, Atkinson had signed on with the RAAF. He was undergoing basic training as a pilot at Point Cook while playing football at Carlton, and soon after his debut was posted overseas as part of the Empire Air Training Scheme, which was designed to fast-track young men from the Dominions into competent aircrew as fast as possible.

Wilf was evidently an outstanding prospect, and so found himself destined for an elite fighter squadron. In early 1943, he was awarded his pilot’s wings and posted to 232 (Spitfire) Squadron, RAF. The squadron was then based on Malta to support the Allied invasion of Sicily in July. On August 12, 1943, 23 year-old Flight Sergeant Wilfred George Atkinson was killed when his aircraft was shot down on a mission over the Aegean Sea. Neither his plane nor his body was recovered.

Wilf’s sacrifice, like that of thousands of other Allied airmen who were killed in the Mediterranean campaign, has not been forgotten by the people of Malta. Near the main harbour of Valetta stands a 15-metre marble column, topped by a gilded sculpture of an eagle. Dedicated to the brave men of all Allied nations who flew in defence of the island, the inscription reads;

Footnote:
Sergeant Pilot Wilfred G. Atkinson of Hampton was a lithographer with Victory Publishing Co. his brother first-class Specialist Sig. L. J. M. Atkinson was a POW of the Japanese at Moulmein Burma.