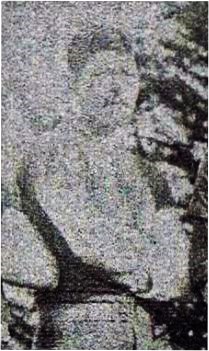 So far, this is the only reference found for W. Heatley.

Now, Bill Heatley (ex Star of Carlton) is also mentioned in a newspaper report found on B. "Bluey" Flowers bio page.
Blueseum was not sure if the photo was a misprint and it was in fact the former player and later the famous Carlton administrator Robert Heatley.
We have included the 1884 photo on both players' pages, until further research reveals if there is one or two Heatleys.
Perhaps there was two players named Heatley.

Late in February 2020 Blueseum received further information about W. Heatley.
At the commencement of the 1908 season, The Herald Friday May 01 (p4) had an article on the coming season.
Under the Collingwood section it mentions a new player;
"Heatley, from Tasmania, a son of Bill Heatley who played for Carlton in the days when the world was younger."
Also Feb. 2020, Blueseum has been informed that Robert had an older brother called William.

Relation of Robert Heatley or the same person?