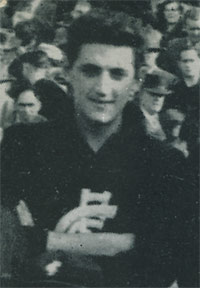 Victor's story is one of many but one that many do not know about. So thanks to Vic's candid and generous recollections we can share his story.

Vic's father arrived in Australia in 1928 and after some hard years processing and picking tomatoes built his own business and by 1934 his wife and two daughters had also arrived in Australia. Vic was born in 1935 followed by his younger sister in 1936. Thankfully taking out full Australian citizenship before 1939 saved the family from the WWII internment camps which impacted greatly on Italian, German and Japanese citizens living in Australia. However the times were tough for any family of Italian heritage at the time and the Garra family had to endure more intense discrimination than was even the 'norm' during the war.

After the war the Garra family moved to Melbourne and Vic eventually found himself in University High School which was the leading public school in Melbourne playing aussie rules. He played in a schoolboy team with the likes of Alan Aylett, Laurie Sharp, Greg Sewell, Brian Guthrie, Dick Pratt and John Powell. Thanks to their coach George Murray, University high students were well regarded and primed for VFL football. Vic was a prefect, captain of the football team and captain of the combined high schools team.

As was fairly common at the time Vic's parents did not want him to pursue football too seriously and it was through the efforts of George Armstrong who convinced them that VFL football was something beneficial. Consequently Vic did not play football at all during 1955 and did not turn up until 1956 and played his first game against Essendon. This was a good game and established some regular appearances for the Blues until an injury playing at full forward in round 4 resulted in missing the rest of the year.

Vic managed to get back into the team in the back pocket for the round 10 and 11 games of the 1957 season before a car crash on the long weekend before the Hawthorn game in round 12 ended any chance of playing more football in 1957.

After some more games for the Blues in 1958 and 1959 including finals Vic went on to have a successful career in business as an early pioneer in the IT industry after moving up to Sydney in 1960. Vic is now the proud father of three grown children and still enjoys his weekly sport either golf or bowls.

Wearing guernsey #24, Garra played 22 games for Carlton commencing in Season 1956. He kicked 3 goals for the Blues after coming through the U19s

He was recruited from University High School (Parkville).