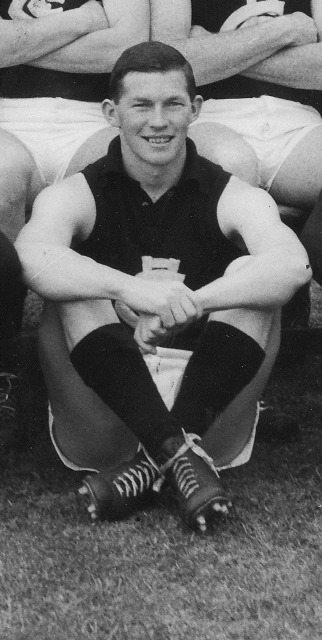 A sometimes flashy rover from North Hobart, Trevor Best showed promise in his first season at Princes Park in 1963, when he made his senior debut in round 10 and thereafter played every match of the season.

But his form - especially his goal-kicking - tailed off in ‘64, and his last 12 games produced only five goals. In fact, all of Carlton’s recognised rovers failed to fire that year, which helps to explain why the Blues eventually tumbled to tenth place on the ladder.

Best played his twenty-first and last match in navy blue in round 16, 1964 at Princes Park, against a finals-bound Collingwood team that was expected to have little trouble with the battling Blues. However, when Carlton captain Serge Silvagni won the toss, he had no hesitation in kicking with a howling gale to the Lygon Street end. The Blues piled on 6.5 (41) to 0.3 (3) and it was game on.

Collingwood wrestled back the lead by 3 points at half-time, as the wind showed no sign of abating, and at the last change the home side had again stretched out a 27-point advantage. In a titanic last quarter, Carlton coach Ken Hands stacked his backline and his team fought tooth and nail to hold the Magpies out – only for a rushed behind to Collingwood to level the scores right on the siren.

At the end of that season Best was released by the Blues and returned to North Hobart, where his playing career lasted until 1971. The number 6 guernsey he had been privileged to wear for two seasons was then passed on to a mop-haired youngster from Yallourn North named Garry Crane.