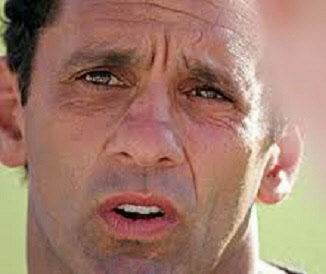 Carlton recruited Tony Liberatore as an assistant coach in 2004. Already a legendary figure at the Western Bulldogs Football Club, he was the only player in VFL/AFL history ever to have won the Brownlow Medal (1990) the Gardiner Medal (1986, 1988) and the Morrish Medal (1984) as Best and Fairest in Seniors, Reserves and Under-19s. After a somewhat controversial 283 games with the Bulldogs from 1987 to 2002, “Libba” had coached the Box Hill Hawks into a VFL Grand Final, before joining the Blues as an assistant to senior coach Denis Pagan.

Standing just 163 cm and weighing in at 77 kg, Liberatore started his football journey at Brunswick City, and later joined North Melbourne’s Under 19 squad. By 1984 he was a star for the Northerners as a goal-kicking rover, and won the Morrish Medal for the best player in the competition. But as so often happens, heavy expectations were heaped upon him, so he soon decided that a change of clubs was a smart option.

By 1986 he was at Footscray, where he found the going equally as hard, despite playing consistently well enough in the Bulldogs' Reserves to win the Gardiner Medal twice in three years. After making his senior debut in 1987, Liberatore had played only 14 senior matches by 1989, and his long-term future at the Western Oval seemed far from secure. It was then that he realized that that the way to beat his bigger opponents was to run harder for longer, and to tackle relentlessly – and the results were spectacular.

Although he missed the last three games of the season through injury, Liberatore won the 1990 Brownlow Medal by one vote from Graham Wright of Collingwood, with Stephen Silvagni of Carlton third. He rarely missed a game over the next five seasons, and in 1992 set a season-high record of 142 tackles. Then, as he reached the latter stages of his career, Libba became an aggressive defensive tagger, and began attracting a mounting storm of criticism for his physical and verbal assaults on his opponents.

Controversial clashes with the likes of Paul Kelly of Sydney, Steven Lawrence of Brisbane and Matthew Knights of Richmond made headlines, but Liberatore was unrepentant and continued to play with single-minded tenacity until his retirement in 2002. He then won the position of senior coach at Box Hill and took the Hawks all the way to a Grand Final in his first season, before accepting an offer from Carlton to join Denis Pagan’s staff.

Unfortunately for all concerned, Pagan’s five years at the helm of the Blues from 2003 to 2007 produced two wooden spoons and a best ladder finish of 11th, so with six matches remaining in 2007 he was replaced by 1995 Premiership star and former Carlton captain Brett Ratten. As part of the changeover, Liberatore also departed at season’s end.

Afterwards, Libba coached a number of suburban clubs including the Sunbury Lions in the Ballarat Football League, the West Footscray Roosters in the Western Region Football League, and the Ascot Vale Panthers Super Rules in the Victorian Metropolitan League. Meanwhile, his son Tom Liberatore was drafted by the Western Bulldogs in 2010 and embarked on a promising career.

In August 2013, during a television interview, Liberatore claimed that Carlton had 'tanked' some games late in 2007 in order to maximise draft picks, claiming that it was 'the vibe' during Match Committee meetings that led him to this belief. Ultimately, no real evidence was provided or offered, and the claims were dismissed by the AFL.

Jezza playing for the Big V.