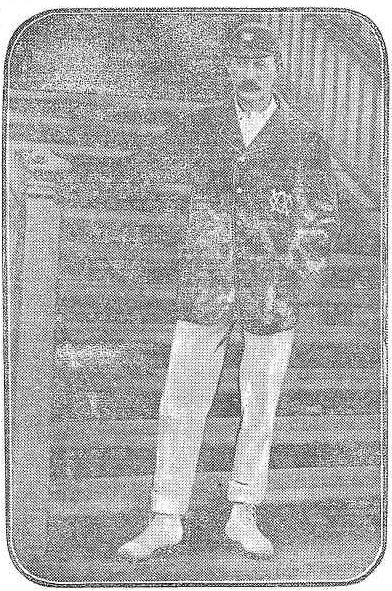 At the Carlton annual meeting held Monday 26 February 1923, the meeting decided to recognise the services of Mr. T. Warne by electing him an honorary life member.
(The Argus, Wednesday 28 February 1923 p6)

Tommy Warne (born January 13 1870) was a long serving Princes Park curator and he lived at "The Lodge," the house which used to be near the "back pocket" on the northern side of the ground.
He was also a top batsman for the Carlton Cricket Club playing for 28 years, scoring for than 10,000 runs. Warne was the only non Test player awarded a benefit match on the M.C.G.
He was involved with Carlton as a player and groundsman for 47 years. Tommy Warne passed away at "The Lodge" July 07 1944 aged 78.

"Princes Park only had three curators in almost 100 years of sport at that venue. The first was Tom Warne played cricket for Carlton and possible also played football for Carlton in the VFA during 1896 was curator from 1897 to 1930. His son Bert Warne took over from 1930 to June 1970 and then Frank Brew (an ex Fitzroy player) was curator from June 1970 to September 1995." (web site: Footystats Diary - Farewell to Princes Park)

"In consideration of his having completed 25 years with the Carlton Club, Tommy Warne, as he is styled by his intimates, has been made the recipient of a wallet well padded with bank notes. The esteemed veteran has held a helping hand in every branch of activities that have resulted in the Carlton Club's present home comforts, its sporting status, and cheerful outloook. He has been a devoted curator, a patient and tireless coach to young players, a pillar of the team, and a whole-hearted champion of every club interest.
Had Warne never lifted a bat or trundled a ball he would still have been a benefactor to the club; but his batting record is such as to almost overshadow even his own worthiness in other departments of club service. Beginning in 1892, Warne has gone to the wickets some 200 times, has scored some nine thousand runs , and claims the outstanding average of over fifty runs for each time he has lost his wicket during the whole period.
On two occasions he averaged more than a hundred for the season, thus - 1898-9, 9 innings, one not out, 1011 runs, average 126.37; 1901-2, 9 innings, 3 not outs, 615 runs, average 102.6. His highest score was 402, hit against Richmond in 1898, the year in which he made the still unequalled record of over a thousand runs in regular club cricket. To Carlton's phenomenal score of 1 for 396 in the same season, against Hawksburn, Warne contributed 140 not out. In addition to the century seasons already noted his wonderful list includes these averages: -
61.22, 56.42, 51.00, 63.12, 76.00, 51.57, 54.52, 82.40, and 61.20. Covering a period of twelve seasons, Harry Stuckey averaged 58.18 for East Melbourne, but the Carlton veteran has more than doubled Stuckey's term, and, very happily, is going strong. Everyone will wish that he may long continue his invaluable service to the Carlton Club and the game."

"T. Warne, has accepted a six month's engagement in Philadelphia, was entertained by his friends at the Apple Tree Hotel, Faraday street, Carlton, and presented with a handsomely illuminated address. On Saturday evening Warne was also entertained by the members of the Carlton Cricket Club at the pavilion. He left Melbourne for America on March 14. If he and the committee of the Belmont Club, at the end of six months, come to terms in regard to his permanent engagement, and he finds that he would like to live at Philadelphia, he will joined there by his wife and children, but otherwise he will return to his engagement with the Carlton Club."
(Trove: Observor, Adelaide, March 31 1906, p19)

Carlton historian Tony De Bolfo has been in contact with a descendant of Tom Warne.
April 2014, Tony has now produced a 2 part article on the long-time Princes Park curator.
Part one can be read here; www.carltonfc.com.au/news/2014-04-10/tribute-to-tom-conjures-images-of-old-carlton