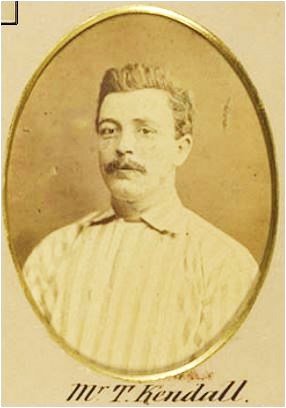 Pennings Vol 5 has Tom Kendall playing for Carlton for just one season 1877. However, Vol 5 also has him playing between 26-37 games.
This seems unlikely and would require two seasons to reach that figure. Further investigation is required.

1874 Kendall named in team to play Albert Park at Royal Park on 22nd. August, and against St.Kilda at the St.Kilda ground on 12th. September.
(The Argus)

1880 Kendall was playing for Tasmanian club Oatlands against the City club as a defender, July 24.

He played Test Cricket before playing a first class game.

England's first wicket fell without a run on the board, and a steady procession of batsmen followed as left arm slow blower Kendall broke through time and time again.
England all out 108. (Kendall 7/55)

(England vs Australia Since 1877, David Frith)


Perhaps the best Australian bowler who never went to England.