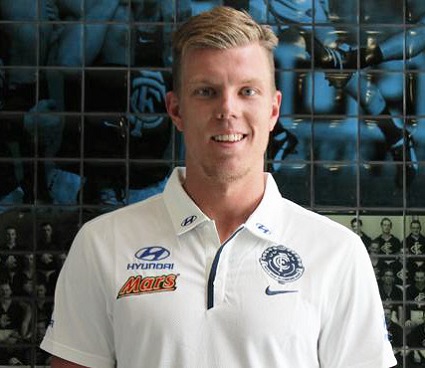 Queenslander Tom Fields’ persistence paid dividends when he overcame previous disappointments and was rookie-drafted by Carlton in 2014. The son of former Essendon and Sydney star Neville Fields, Tom grew up on Queensland’s Gold Coast and played his junior football with the Labrador Tigers. Taller and heavier than his father, he represented Queensland at Under-16, Under-18 and Under-21 level, but was overlooked when he registered for the National Draft.

In 2013, he transferred to South Adelaide, where he impressed a number of good judges as a rebounding defender. His booming left foot was a real weapon for the Panthers, helping them through to a Preliminary Final the following year, and convincing Carlton to recruit him with selection 41 in the 2014 Rookie Draft.

“It was an absolute surreal experience – I still don’t really know how to describe it,” Fields told the Carlton website a few days later. “I’m just stoked - over the moon. Walking through the change rooms, and seeing Chris Judd and (Marc) Murphy’s posters everywhere, it’s pretty incredible. It all hasn’t begun to sink in yet, but I’m sure it will.”

Unfortunately for Tom and everyone else involved at Carlton in 2015, his first and only season at Princes Park was an utter disaster. The Blues won only four games all year, sacked senior coach Mick Malthouse before the year was half done, and finished on the bottom of the AFL ladder for only the fourth time in the clubs’ history. Fields played two consecutive matches late in the season in guernsey number 37, but was then axed in the inevitable post-season clean-out.

Fields headed back to Sth Australia to play with SANFL club Sth Adelaide for seasons 2016 to 2018. In his two stints with the Panthers (2013 - 2014 & 2016 - 2018) he would play 88 games for the club. At the end of the season he would be heading back home to Queensland and play with NEAFL team the Southport Sharks. Fields would nominate for the 2019 Mid-Season Rookie Draft in hope to rekindle his AFL career.