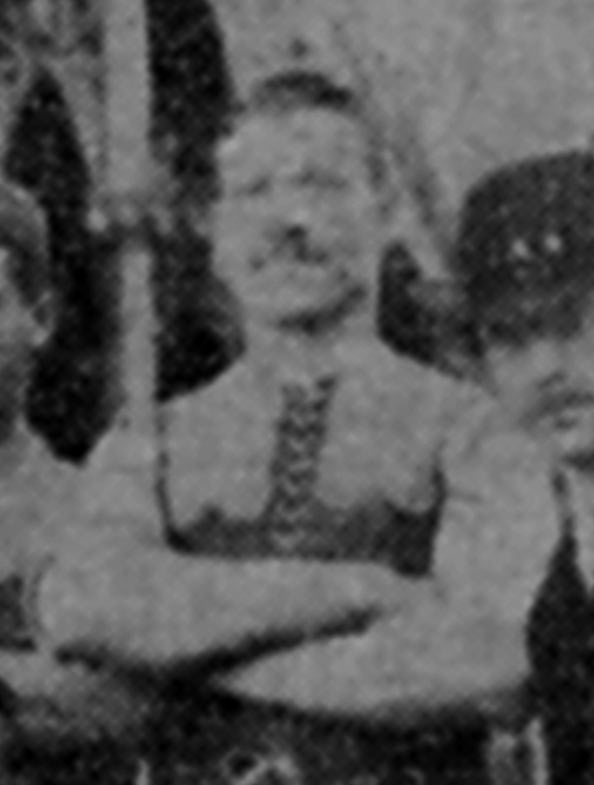 Recruited from Hotham 1886 via Star of Carlton.


Above; T. McCracken appears in the 1887 Carlton Football Club team photo against Norwood in Adelaide.

1887
On the Carlton tour to Adelaide, on the way back from the hotel a drunken (unnamed) Carlton player stole a sheep's carcass that was hanging in a butcher's shop.


May 09
The Argus (p6) reports;
"A member of the Carlton Brewery Fire Brigade, named Robert McCracken, 23 years of age, died from typhoid fever at the Melbourne Hospital on Tuesday last after a very brief illness. He was an active fireman, and was very popular with all his comrades. It has been determined to bury him with fireman's honours, and the members of the various brigades are requested to assemble at the Carlton Brewery Fire Brigade station at half past 2pm. The funeral procession will make its way down Bouvervie-street, along Grattan-street and Madeline-street to the Melbourne Cemetery. The coffin will be born on a manual fire engine, and the procession will be headed by a band. McCracken was also a prominent member of the Carlton Football Club, and members of the club are also invited to take part in the procesion."

"Everybody connected with athletic circles (writes the Herald), with many more, will hear with extreme regret of the death of Thomas McCracken, a well known member of the Carlton football team, which took place on Wednesday, from typhoid fever.
McCracken in 1885, was one of the pick of the Star of Carlton, and in 1886 took a big part in the Hotham team. In the following year he was sent with the dark blues for a South Australian tour, but since then he has not been playing with the team. He was a man of splendid physique, and played back, where his services were more than usually effective.
McCracken was a member of the Carlton Brewery Fire Brigade, and it was his voice that was heard in the street when the men were on the rush to the scene of some conflagration or other. On all hands he was regarded as a good athlete and a game fireman, while privately he was highly respected, and had a large circle of friends. Deceased was only 25 years of age."
(The Geelong Advertiser, Friday May 10 1889 p3)

1889 June 17 Monday
The Argus June 18 (P5) reported;
"An entertainment was given at the Hibernian-hall last night in aid of the widow and child of the late Thomas McCracken, who was a prominent member of the Carlton Football Club and Carlton Brewery Brigade, who died a few weeks ago in the Melbourne Hospital from typhoid fever, after a very brief illness. The hall was crowded in every part, and the miscellaneous programme presented by a well known number of amateurs, assisted by Mr. A. Dampier, Miss Nellie Greenless, and Miss Ada Rochfort, was warmly received."

"We wonder how many members of the Old Brigade will remember "Shook the Sheep" McCracken, who came across from Victoria with the Carlton team to play Norwood for the championship of Adelaide in 1893 or 4. McCracken on visiting the city was struck by the unintelligent look of Adelaide's then notoriously fat policemen and made a bet that he would steal a sheep from a butcher's shop and run with it along the principal street - Rundle street - almost from one end to the other, without hindrance from any policeman. McCracken "shook" the sheep right enough and won his bet, and Adelaide policemen were subjected to a merciless chaffing for a long time afterwards.
McCracken was big red-headed fireman who was killed afterwards by injuries received at the big Bijou Theatre fire in Melbourne."
(WA Sportsman June 04 1915 p5)