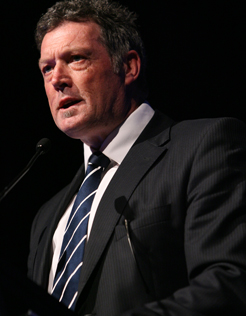 Steven Icke joined Carlton in March 2007, after spending six years at the Fremantle Football Club in the roles of Football Manager and General Manager; Player Personnel and List Management. He had previously played 198 VFL/AFL games with North Melbourne and Melbourne - including the Shinboners’ 1977 Premiership, and had represented Victoria on five occasions.

After retiring from the field, Icke developed strong management, leadership and communications skills through tertiary studies, and he was highly-regarded throughout the AFL for his work with the Dockers. Therefore, when Richard Pratt was appointed President of the Carlton Football Club in 2007, Icke was specifically targeted to head the Blues football department, and his acquisition – along with that of CEO Greg Swann from Collingwood - was seen as a real coup.

Pratt, Swann, Icke and senior coach Brett Ratten then landed an even bigger prize in October, 2007 when West Coast Premiership captain Chris Judd agreed to join the Blues on a 5-year contract, paving the way for the rebirth of the Blues and a return to finals football just two years later.

By 2011, however, rumours were circulating that a rift had developed between Icke and Ratten, even as the Blues reached the Semi Finals for the first time in a decade. In late September, the club announced that Ratten’s contract had been extended by two years, and barely days later, Icke handed in his resignation.

Greg Swann made the announcement to the media. “We appreciate Steven’s decision to further develop his career, and understand his need to expand his knowledge and experience with a different organisation,” he said. “Steven restructured the Football Department and has played an important role in the resurrection of the Carlton playing list since joining the club in 2007. On behalf of everyone at Carlton, I wish to thank him for the important contributions he has made to the club.”