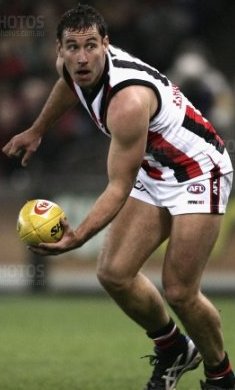 Powell was originally recruited from East Camberwell via St Kevins, through to TAC Cup team the Central Dragons.

Stephen Powell was bit of a journeyman in the AFL, Powell made his debut with the Western Bulldogs as a 20-year-old in 1997. He became known as a solid player whose hardness at the ball was very valuable, continuing this role as the Bulldogs reached preliminary finals in 1997 and 1998. Lack of pace, however, seemed to be his problem and at the end of 1999 he went to the Melbourne Football Club. He was again traded at the end of 2002, this time to the St Kilda Football Club.

His experience at the Saints was important, and he was an often underrated player whose contributions were an important part of a midfield that included stars such as Lenny Hayes, Robert Harvey and Nick Dal Santo. In 2003 he finished 3rd in the Trevor Barker Award and continued this form into 2004. Powell played in St Kilda’s 2004 AFL Wizard Home Loans Cup winning side – St Kilda Football Club’s 2nd AFL Cup Win.

In 2005, however, Powell's career hit a bit of a hurdle. Returning from injury in Round 9 he never quite reached the level of consistency of 2003, and lack of pace then became an issue, although he was a regular first team member. All of a sudden at the end of the year there were doubts about the future of the just-turned-29 Powell, but he later signed a one-year contract, meaning a sharp downward turn in speed and form has limited Powell's chances. 2006 was Powell's last season of football, playing only 10 matches and announcing his retirement, in September, a week after St Kilda's exit from the 2006 AFL Finals Series.