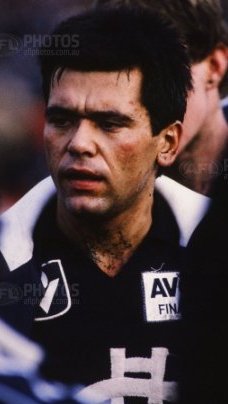 Had he played in any other era in Carlton’s history, the man with one of the longest names in the game; Spiro Kourkoumelis, would surely have played more than 100 senior matches for the Blues. Spiro was unlucky in that he emerged at Princes Park during Carlton’s golden decade of 1979 to 1987, when a star-studded playing list took the Old Dark Navy Blues to five Grand Final appearances and four Premierships. However, that success also restricted the opportunities for a group of very capable players like Kourkourmelis, who didn’t always get the opportunities his talent deserved.

After being recruited from local club Princes Hill in 1979, Kourkoumelis was part of Carlton’s Under 19 flag side later that same year. Still just 16 years old, he represented Victoria in the elite Teal Cup interstate competition in 1980, and by 1981 was knocking on the door of senior selection at Carlton after a series of eye-catching matches with the Reserves. Meanwhile, his younger brother Peter had joined him at Princes Park, and was in the midst of his handful of games with the Under 19's. The problem for Spiro however, was that he was competing for a midfield-forward role in the Blues’ senior team against the likes of Barry Armstrong, Jim Buckley, David Glascott, Wayne Harmes, Ken Sheldon, Wayne Johnston, Greg Wells - and at least three or four others.

Kourkoumelis wasn’t a gazelle on the field, but his ball-gathering ability and disposal were first-rate. He was an ideal link-up player through the middle of the ground, and always a threat around the goals. Eventually, an injury to Wells provided the opportunity Spiro had been craving, and he was named to make his senior debut in the centre for Carlton against Melbourne at Princes Park in round 17, 1981 – six days before his 18th birthday. Wearing guernsey number 49, he got away to a dream start, too, by kicking a goal with his first kick, after receiving a gift handball from ‘Bomba’ Sheldon in front of the Heatley Stand. Carlton went on to destroy Melbourne by 73 points that day, on the way to the 1981 Premiership. However for Kourkoumelis, it was to be his one and only senior match for the season.

In 1982, Spiro swapped to the number 28 guernsey previously carried by ‘Percy’ Jones, but that didn’t make his task of breaking into the seniors any easier. While the brilliant Blues swept to back to back flags that September, Kourkoumelis managed six sporadic games between rounds two and fifteen, before finishing off another impressive year at the lower level by being voted the Reserves’ Best and Fairest.

The blood, sweat and dedication involved in winning those consecutive flags had ramifications in 1983, as retirements and injuries started to create opportunities at last for Carlton’s up-and-comers, and Kourkoumelis was one beneficiary. He grabbed his chance with both hands, and by mid-year was a mainstay of the side, either in the centre or ruck-roving. The Navy Blues wound up fifth on the ladder, and Spiro experienced the intensity of finals football for the first time when his injury-depleted side lost the ‘83 Elimination Final to Essendon by a disappointing 33 points. Still, that milestone capped off a year in which he arrived as a league footballer by playing 18 games, picking up seven Brownlow Medal votes, and finishing fifth in the voting for Carlton’s Best and Fairest.

As 1984 unfolded, Kourkoumelis continued playing solid, effective football. He had strung together another 18 games and 18 goals by the time the home and away season concluded with the Blues ensconced in third place, and poised for a tilt at yet another flag. But to his dismay, Spiro was left out of Carlton’s line-up when the lead-up finals in were again held at VFL Park, Waverley. The wide open spaces called for pace, pace and more pace, so the Blues included four rovers in the teams that played Hawthorn in the Qualifying Final, and Collingwood in the Semi Final. The plan misfired however, and both games were lost - by 30 and 25 points respectively.

In the off-season, Melbourne and Collingwood each made substantial offers to Kourkoumelis, but he eventually knocked them both back and had another workman-like year in the midfield. He played in his second final when Carlton lost the 1985 Elimination Final to North Melbourne, then farewelled his coach of the previous five years when David Parkin retired at the end of the season.

Carlton’s incoming coach, Robert Walls, stamped his authority on the club and its playing list with an intense pre-season in 1986, while telling his players that those who didn’t meet his expectations probably wouldn’t see out the year. Indeed, such words proved prophetic for Kourkoumelis. After playing five of the first six senior matches, he was sent back to the Reserves, and stayed there right through until Carlton claimed yet another lower grade Premiership with a 74-point drubbing of Footscray in the curtain-raiser on Grand Final day. While close to 100,000 fans watched on, Spiro was one of Carlton’s best – kicking four goals and ranging far and wide to set up many of the Blues’ attacks in a memorable farewell game.

Before that year ended, rumours were rife that 22 year-old Kourkoumelis would be cleared to Collingwood. But Carlton refused to bolster their fiercest rival in any way, so Spiro found himself bound for the next chapter of his football life at St Kilda, where he went on to play another 35 senior matches between 1987 and 1990.

In 1991, Kourkoumelis retired from AFL football and headed to VFA club Coburg, where he joined his former Carlton team-mate Mark Williams. 'Kooka' would play 17 games and boot 15 goals playing at the Lions.

Kourkoumelis wore No.53 for Carlton's reserves in 1980.

He is the proprietor of Avanti Cycles on Sydney Road, Brunswick.