Carlton lost to Geelong by 13 points at the MCG.

Both sides exhibited poor skills during the first half of this final, dropping marks and kicking plenty of 'clangers'. In spite of this, Carlton managed to establish a half-time lead, thanks mainly to a six goal opening term. Then Geelong held the Blues goalless in the third quarter, and established a narrow 5-point lead at the final break. By midway through the last quarter, both sides had kicked 9 goals each and the game was there for the taking. But with the aid of the breeze, Geelong's pace then started to expose the tired Carlton team, and they used a more direct style of play to slam on three majors in the final 10 minutes, to run out 13-point winners.

On the Thursday night, Carlton made two forced changes to the side to play the cats. Horrie Bullen was ruled out with a thigh injury and Bob Green could not be considered due to influenza. Into the side came Keith Shea and Eric Huxtable, both recovered from injury. Huxtable was put through some gruelling tests on his arm before the selectors were satisfied that he was fully fit.

There was a dramatic announcement made by Frank Gill during training that he intended to resign as captain, as he considered that his form had suffered since taking on the captaincy and its associated duties. The committee accepted his resignation and the players elected Mocha Johnson as their captain. Gill was persuaded by the players to accept the vice-captaincy. This game would mark Charlie Davey’s 100th for the Blues.

In ideal conditions, Carlton won the toss and elected to kick to the city end, which the blustery wind seemed to favour. From the start, both sides seemed nervous and overanxious. Although play was fast, there were plenty of errors being made from both sides. Carlton opened the scoring with a rushed behind before Geelong answered with a snapped goal following a chain of passes. The Blues scored their first goal after Cooper swooped on a Geelong error and kicked to Davey who kicked truly. Geelong attacked around the wing and were rewarded with a free kick close to the boundary, from which a goal was scored. At this stage, Geelong were the faster and smarter team and Carlton appeared sluggish. Geelong was attacking continuously, forcing Carlton’s defence into errors. Jack Carney, who would later play for the Blues, was playing particularly well for Geelong. Then Carlton steadied and forced the ball forward for a behind. A snap goal followed from Crisp, before Shea found Davey for the third Blue goal and the lead. Despite Geelong’s strong defence, Carlton were now getting on top and went ahead from a Leffanue snap goal. Gilby was a stalwart in Carlton’s defence and prevented a sure Geelong goal. Carlton had adopted a long kicking game, making good use of the breeze. Clarke, with quick thinking, kicked off the ground in a scrimmage which resulted in the fifth goal. Close to the bell, Crisp snapped a nice goal to give the Blues a four goal lead at quarter time. Davey’s outstanding aerial work had been a feature of the quarter and Gilby and Crisp were both playing well.

Mackie and Davey opened the second term with two fine marks, from which only a behind was scored. Geelong answered with a goal from a tight angle, after a free was awarded. Gilby was involved in many defending moves. Although the game was not of a high standard, Carlton was winning all over and holding the cats against the breeze; Carlton’s tough and rugged play forcing Geelong into errors and fumbling. Geelong reduced their deficit to 14 points after a fine snapped goal but missed an easy shot after a free was awarded right in front of goal. Carlton then brought the ball the full length of the ground where Vallence marked and kicked his first goal. In response, a Geelong shot hit the post. Playing in front, Shea snapped Carlton’s eighth goal to restore the 24 point margin, but right on the half time siren, a Geelong player was pushed and goaled from the resulting free to make the difference three straight goals at the main break. Gilby, Davey, Crisp and Opray had been very good in the first half.

A rejuvenated Geelong came out after half time. Immediately into attack, two behinds were scored from narrow misses before a clever goal made the difference only ten points. Gill averted another scoring chance with some good defensive work. Geelong was now playing polished football and getting through Carlton’s defence. In addition, the breeze had now swung and was favouring Geelong’s end. Another Geelong goal made the difference only two points and Carlton now seemed the worried and flustered side, with the defence getting little respite. An attack from Crisp and Shea was easily repelled, and another through Davey, Opray and Kelly suffered the same fate. Davey kicked a behind from a free kick and Gill, with a fine mark, stopped a determined Geelong attack. Carlton suffered a blow when Huxtable, who had been playing well, limped off with a groin injury and Egan now took the field. A long shot from Green just missed and then Davey also missed with a shot after the bell. Carlton had been held goal-less for the term and led by only slim five points at the final change.

An early goal gave Geelong the lead and, a minute later, their ninth goal meant the Blues were down by seven points. Desperate play by Carlton resulted in a behind to Crisp and then Cooper and Clarke got the ball to Vallence, who marked for his second goal to level the scores. Johnson, playing a captain’s game, stopped a Geelong attack, but a lucky free kick and a goal restored their lead to six points at the half way mark. Geelong was the quicker side, playing with more system and purpose than Carlton. When Geelong evaded several Carlton defenders and goaled, they seemed to have a grip on the game. But Davey, heroic for Carlton all day, marked a sixty yard kick from Johnson and goaled to be only a goal down. Mackie and Egan prevented another Geelong goal. With desperate play from both sides and the crowd hoarse with excitement, Geelong scored a behind to make their lead seven points. Davey again stopped a Geelong shot right on the line, but the sealer came when his return kick was marked and a Geelong goal followed to end Carlton’s season by thirteen points.

Basic statistics were recorded in this match, and Carlton was supreme in the air, taking 86 marks to Geelong's 68. In his 100th game for the club, Charlie Davey was a standout for the Blues, taking 15 marks in a another big-hearted effort. 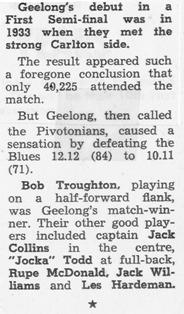 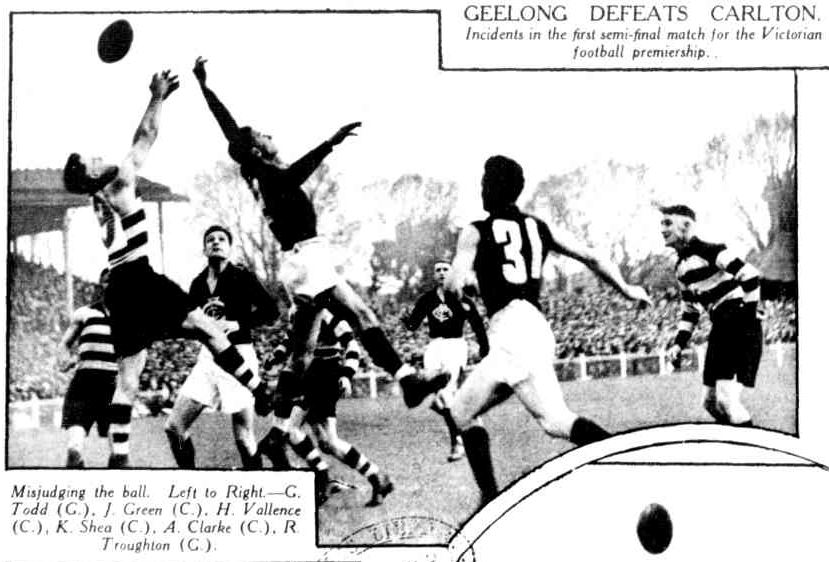 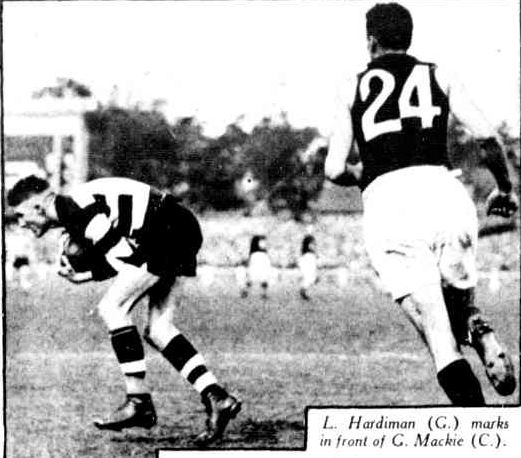 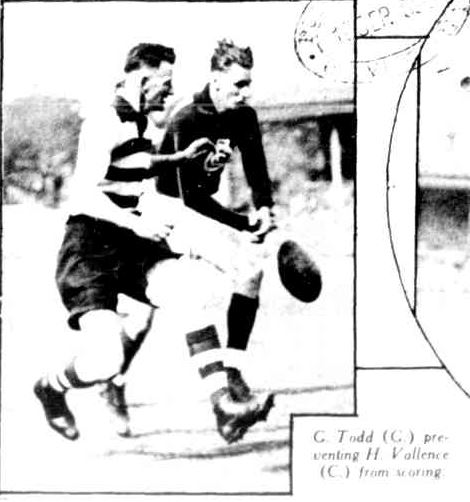 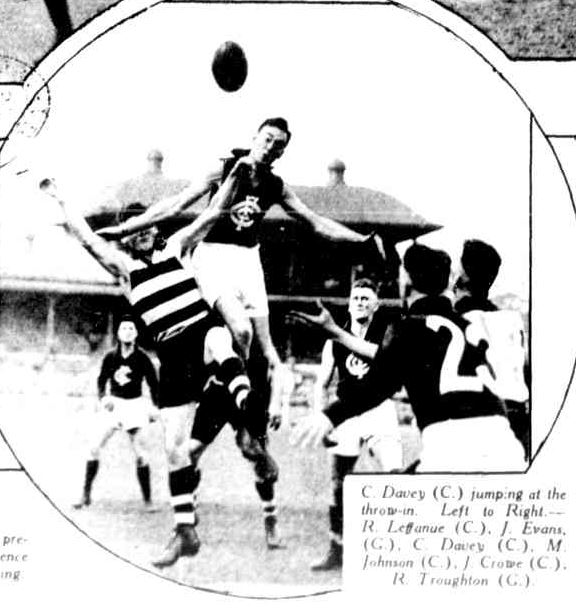 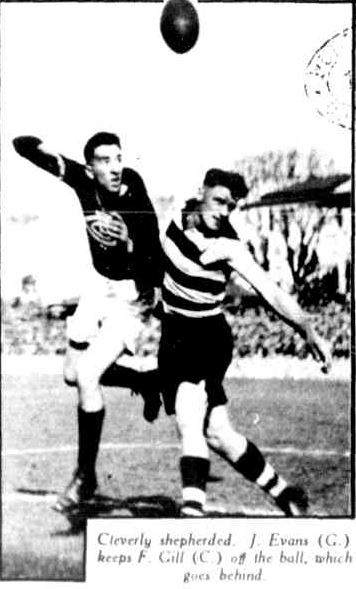 Pictures from the Australasian, 16th September, 1933.