Single - Gamer, and brother of Earl. 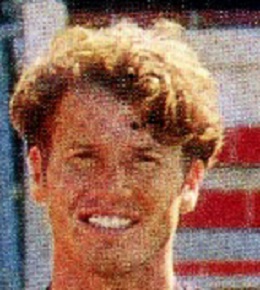 
When Scott Spalding joined his older brother Earl at Carlton in 1993, the Blues held high hopes for the classy flanker from Perth. But after only one senior appearance in guernsey number 8, Scott decided that AFL football was not for him, and soon afterward returned home to Western Australia.

Scott’s lone match for Carlton came in round 1, 1993 against Fitzroy at Princes Park. After finishing seventh the previous season, Carlton had recruited well and looked forward with confidence to a much better year. The team that faced Fitzroy was a daunting one, with stars like Kernahan, Williams, Bradley and Silvagni in the line-up, as well as Earl Spalding at centre half-forward. Also on debut that day was a wiry-framed youngster from Glenelg in South Australia; Andrew McKay - beginning a stellar career that would later take him to Premiership glory, the Hall of Fame, and captaincy of the Carlton Football Club.

The game itself was an open, high-scoring contest in which Kernahan, Rohan Welsh and Brent Heaver each kicked four goals. Carlton looked to be heading for victory at the last break with a 24-point advantage, but Fitzroy found plenty in the final term, and with the aid of a freshening breeze, kicked 7.2 to Carlton’s 2.2 and edged out the Blues by six points. Scott Spalding started on the bench, gathering ten possessions in two or three brief runs at half-forward. He had one shot at goal, only for the ball to drift wide for a behind.

The reasons why Scott decided not to persevere with AFL football after just that one outing are unclear. Spalding spent a season at Port Adelaide in the SANFL and decided to head back home WA. However, when he did resume in the WAFL, he built an impressive career, playing 154 games at Perth and East Fremantle between 1995 and 2002, and booting 98 goals. When Earl finished up at Carlton, he rejoined Scott at East Fremantle, and together they shared Premiership glory with the Sharks in 1998. Earl took over as coach of East Fremantle in 2001, but both brothers left the club when Scott ended his playing career after the 2002 season.