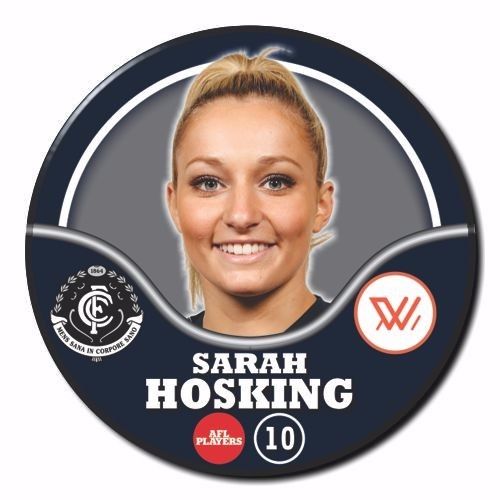 Sarah Hosking exploded onto the women’s football scene after being introduced to AFL through a talent search in March 2016. Hailing from an elite netball background, the No.19 draft pick has developed into one of the most promising midfielders in the competition in just six months. Senior women’s coach Damien Keeping says she will add depth to the Blues' midfield. “Sarah’s ability to impact within, as well as on the outside of the contest, will make her a critical weapon in our search for midfield dominance in 2017,” Keeping said. Sarah's twin sister Jessica Hosking was also drafted by the Blues.

Hosking was drafted by Carlton with the club's third selection and nineteenth overall in the 2016 AFL Women's draft. She made her debut in the inaugural AFL Women's match against Collingwood at Ikon Park while her sister Jess missed the inaugural season with a left anterior cruciate ligament injury, making her debut in the corresponding match the following year. On 2 September 2017, Hosking played for Victoria in the inaugural AFL Women's State of Origin match. In 2018, Hosking recorded a then-league record 16 tackles in Carlton's round 2 win against Greater Western Sydney in heavy rain. Her record was broken two weeks later when Adelaide's Ebony Marinoff recorded 21 tackles, a national senior-level record, in similar conditions against the same opponent in round 4.

Blues acquire pick No.9 for Hosking
Carlton has completed a trade which will see Sarah Hosking depart to Richmond. The Carlton Football Club now holds pick Nos.7 and 9 in the Victorian pool of the 2020 NAB AFLW Draft after completing a trade with Richmond on the opening day of the AFLW sign and trade period. The Blues received the 15th overall pick (No.9 in the Victorian pool) in a trade that sees out-of-contract midfielder Sarah Hosking depart Ikon Park. This now means Carlton currently holds a strong hand in the upcoming draft with two first round selections. Hosking departs Ikon Park after 30 games in the Navy Blue after being an inaugural player with the Game Changers. Carlton GM of Women’s Football Ash Brown wished Hosking all the best and said the Club was pleased with the opportunity to bring in more elite young talent through the door. “We’ve seen the quality of players we’ve been able to bring to the Club through the first round of the draft in recent years so it is exciting to again have another opportunity to do that,” Brown said. “Given Sarah was coming out of contract with us, we are pleased to secure such a high draft pick and thank Richmond for being willing to reach a deal that was fair and reasonable for both parties. “Sarah has been a fantastic contributor to the Carlton Football Club over the last four seasons, both on and off the field. She departs the Club with lifelong friendships and we wish her well for her next challenge.”


Jess and Sarah Hosking, identical twins, both drafted to Carlton at AFL Women’s Draft
FOR twin sisters Jess and Sarah Hosking, the AFL Women’s inaugural draft day could not have gone any better. Not only were they both drafted, but the 20-year-old identical twins will both play at Carlton next season. Sarah was taken by the Blues with pick No.19 and then it was a nail-biting wait before Jess had her name read out by the Blues at pick No.78. “Once Sar went it was fingers and toes crossed and hope that I got to the same club,” Jess said. “We were both definitely hoping we were going to Carlton. “It couldn’t have worked out any better. That was the biggest thing we were dreading, the fact we may go to different clubs.” Their Dad was at Wednesday’s draft but their mum was working in Perth, but she didn’t miss a minute as she watched the day unfold via Skype. Sarah and Jess had never played football before this season. They were talented netballers playing in the Victorian Netball League before they turned up to an AFL talent search at the start of the year and were encouraged to join their local football club Seaford. The pair made a seamless transition to their new sport, playing on the ball, before Jess tore her anterior cruciate ligament in about Round 8 this year. It makes being drafted for Jess even more special. “To be honest, I thought I had no chance at all (of being drafted) as soon as I did my knee,” she said. “I thought it was one in a million, but for it to actually happen, it’s crazy.” The twins will be joined at the Blues by Seaford teammates Katherine Gillespie-Jones and Natalie Plane. - ELIZA SEWELL, Herald Sun (12th October, 2016).


Hosking: AFLW the pick of the bunch
Carlton has been one of the major beneficiaries of athletes moving from other sports to the NAB AFL Women's competition. Marquee player Brianna Davey, who had a promising soccer career, is the Club's vice-captain and has been dominant for the Blues so far. Sarah Hosking – pick No.19 in last year's draft – made the transition from netball and predicts more players will make the switch next season. "The success of the likes of Davey, Erin Phillips (from basketball to Adelaide co-captain) and others will inspire others," Hosking said. "It might be hard on other sports, but for athletes who have always wanted the opportunity to play footy, they're seeing (what's possible) first-hand." The 21-year-old Hosking said making the switch to footy was the "best decision" she has made, notwithstanding her initial nerves. "At the start I was a bit hesitant because I was worried I was giving up netball which I've played for over 10 years, but my club (Peninsula Waves) was really supportive in helping me make that decision and giving me the go-ahead to train and play footy," she said. Carlton's playing list of 27 has been hit by three season-ending injuries, on top of losing Hosking's twin sister Jessica to serious knee and shoulder injuries before the competition started. With that in mind, Hosking would like to see the AFLW club playing lists increased. "It'll definitely be something they (the AFL) look at given there's been so many injuries in the first season," she said. "Jess' been great. The commitment she's had knowing she wasn't going to play this season (has been impressive). That's tough for anyone." Hosking won the VFL Women's Rising Star Award in 2016 playing for Seaford and the midfielder was a key contributor in the Blues' win over the Bulldogs last weekend, finishing with 13 disposals and using her pace through the middle of the ground to advantage. Carlton needs to win its remaining two games and hope Adelaide loses to either Collingwood or Melbourne for a chance to make the AFLW Grand Final. But Hosking said the Blues' focus wasn't drifting any further than Friday's clash with Fremantle. "I haven't been to Perth before so that'll be interesting," she said. "We're prepared for the heat." Carlton will face the Dockers at Domain Stadium from 3:05pm WST on Friday afternoon before returning home to face Brisbane in the final round of AFLW on Sunday 19 March. - Nic Negrepontis, AFL Media; March 9, 2017


Blues celebrate International Women's Day.
It’s not every day you get to kick a footy on the steps of Parliament House, but today Carlton AFLW twins Sarah and Jess Hosking did just that. In celebration of International Women’s Day on Wednesday 8 March, the Hosking sisters – along with a selection of female athletes from four different sporting codes – joined Members of Parliament and Minister for Sport John Eren at Melbourne’s iconic Parliament House. As the morning sun beamed down on the steps of the Spring street building, the sportswomen gave the MPs a few handy pointers with either a football, a soccer ball, a cricket bat or a netball in-hand. In support of the Victorian Government’s ambition to see Victoria become the sporting capital for women as well as men, the event acknowledged the contribution of women in sport and the significance of sport in enhancing gender equality. Here's a selection of snaps from the event: - Jacqueline Guldon, Carlton Media; March 8, 2017