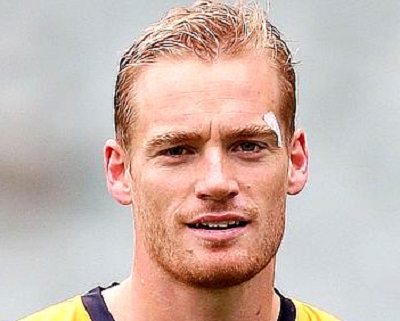 
A hard-running midfielder with an eye for the goals, Sam Kerridge joined Carlton during the 2015 Trade Period after spending three seasons with the Adelaide Crows. Carlton gave up lively forward Troy Menzel and National Draft selection 28 to secure Kerridge, in a deal that was considered a win for both clubs.

Originally from Mildura in far-northern Victoria, Kerridge moved to Bendigo as a 15 year-old to further his football ambitions. Within a year he was playing TAC Cup football with the Bendigo Pioneers, and was a member of the Under-18 Victorian Country squad. In 2010 he was appointed captain of the Pioneers, before stepping up to VFL level the following year to play three matches with the Bendigo Bombers.

Sam’s form at VFL level impressed a number of AFL clubs, including Adelaide and the Western Bulldogs, but on draft day in 2011 Adelaide were best-placed to claim him at number 27. However, although he made his AFL debut for the Crows early in 2012, it wasn’t until the following year that he claimed a regular place in the Adelaide line-up – often as the Crows’ substitute. In round 9, 2013 at Docklands, he was on the ground from the first bounce against North Melbourne, and set the game alight by kicking 6 goals as Adelaide won a thriller by one point. Kerridge won a Rising Star nomination for that brilliant effort, although afterwards the increased expectation was a heavy burden.

Because he has always been a fanatical trainer, Sam has had to cope with muscle and ligament strains on a regular basis. Season 2015 at Adelaide began on a positive note when he won the clubs’ pre-season time trial, then a series of thigh and hamstring injuries knocked his program askew, and he ended up playing only one senior game all year. In light of those set-backs, Carlton’s approach to Adelaide seemed perfectly timed – especially because Adelaide had never made a secret of their interest in Menzel.

Therefore, Sam started out with the Blues in honest, determined fashion in 2016, averaging 21 possessions and almost five marks in each of his 21 matches in guernsey number 11, on the way to well-deserved top-ten Best and Fairest placing. In following seasons Kerridge would secure opportunity from his hard work at the Northern Blues, but not quite secure a permanent role. 10 games in 2018 including 8 in a row mid season, as the Blues midfield and defence fell away, was a promising sign, before he found his way back to the 2s. Kerridge was not recontracted for 2019.

Sam Kerridge decided to take the opportunity to coach Bendigo team White Hills FC for the 2019 season. The White Hills team is affiliated with the Heathcote and District FNL, he would be joined by former Blues team mate Jed Lamb in his debut season.