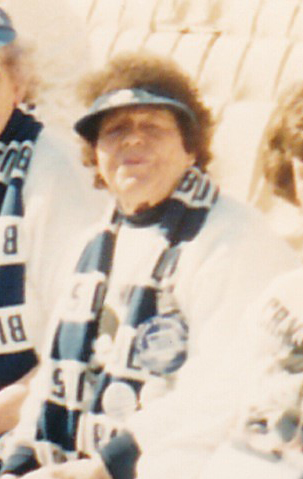 Ruby was a true blue all her life and was one of seventeen children that lived their early years at 56 Garton Street which is right opposite the Carlton ground. As a youngster she would gain entry into the ground via the Groundsman's house known as "The Lodge" through a side gate located at the Garton St end.
Ruby was the proud grand-daughter of Carlton legend of the 1880's, Mick Whelan who instilled in all his children and grandchildren what a great team Carlton are.
Ruby was involved with the cheer squad through the 1970s to 1990s and was active in encouraging and supporting young Carlton fans to join.
Ruby was an identity around the social club for many years and featured in TV advertisements in the 1980s promoting the Blues.
Ruby leaves behind a lasting legacy that her children Wayne and Heather with their children and grandchildren who are all avid Carlton supporters.

Ruby was escorted from the Carlton ground after using an umbrella towards the umpire after John Nicholls was 'King Hit' and knocked out by South player, Ken Boyd.
This incident occurred in the forward pocket (near the point post) at the Heatley Stand end and resulted in Ruby being taken around the boundary by the authorities and removed from the ground.

Ruby travelled interstate to Sydney to watch her beloved Blues in the 1980's and was a member of the club for more than 70 years standing until she passed away on the 9th of May, 2017 at the age of 96.