Carlton headed north for this Friday night clash against the Sydney Swans embroiled in more controversy and more recrimination. Deep in crisis, the Blues had sacked senior coach Mick Malthouse a few days earlier, and installed his assistant John Barker in a caretaker role for the remainder of the 2015 season.

Apart from the challenge of taking on one of the Premiership favourites, Barker’s debut was made even more daunting when Carlton’s entire first choice midfield of captain Marc Murphy, Bryce Gibbs, Chris Judd and ruckman Rob Warnock were all ruled out of the match by injury. Andrew Carrazzo, Lachie Henderson, Andrew Walker and Nick Graham were worthy replacements, but there was no denying the gulf in class and experience between the two sides. 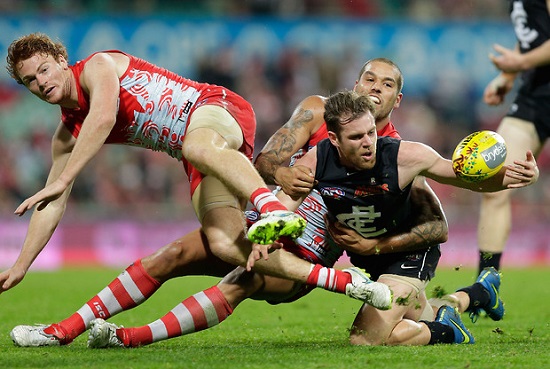 Carlton’s problems were evident before the first bounce, when the obviously undersized Simon White was assigned to Sydney’s giant full-forward Lance Franklin. Acting captain Sam Rowe picked up Franklin’s equally-imposing counterpart Kurt Tippet, while tyro Pat Cripps was asked to lead the Blues in the midfield. Dylan Buckley was nominated as substitute. In a bright beginning, Carlton seized the early initiative and had the first three shots on goal, before Franklin asserted his authority to post three majors in six minutes. Coach Barker then switched Rowe across to the big Swan, and although Franklin remained a constant threat and ended the game with seven goals, Carlton's stand-in captain stuck to his task and won his share of the one-on-one contests. After leading by 22 points at quarter time, the Swans continued to make the most of their opportunities as they kicked their sixth straight goal from set shots. Kade Simpson, Carrazzo, Cripps and Rowe were battling hard for the Blues, but the deficit had almost doubled to 42 points at the long break.

Levi Casboult stood out for Carlton in the third quarter, hauling down a couple of strong marks and kicking a long goal to keep the flickering flames of resistance burning. Two silly mistakes during time-on however – both resulting in easy majors to Sydney – blew the margin out to over ten goals at the last change of ends. Meanwhile, Troy Menzel (who had not seemed fully fit from the start) had been subbed off. Menzel’s replacement Dylan Buckley made an immediate impact when he soccered through the first goal of the final term. Andrejs Everitt – who had been prominent throughout at both ends of the ground – added two more, before Zach Tuohy landed another of his trademark long bombs. Still the Swans could not be contained, and although Carlton won the quarter by three points, the final margin ended up as another ten-goal demolition.

On a night when at least some weight was lifted from supporters’ shoulders, Carlton's best contributors were Cripps, Carrazzo, Simpson, Docherty, Everitt, Bell and Rowe. True, the team had been well-beaten once more, but this time, at least we had a crack.

1987 Captain of the Year - Stephen Kernahan.