In rainy weather and a biting cold wind, Carlton inflicted Collingwood’s first defeat of the season at Princes Park. Despite the conditions and forced absences of several players, both sides gave a great exhibition of wet weather football, with Carlton adapting their game well to run out comfortable winners by 29 points.

Carlton announced five changes on Thursday night. Eric Huxtable and Keith Shea were away with the State side in Western Australia, and Jack Cashman, Clen Denning and George Dougherty were omitted. Into the side came Norm Le Brun, Ted Pollock, Jack Cooper, Ron Cooper and Ray Quinn as 19th man. Two further changes were made before the game, when Keith Dunn (influenza) and Gordon Mackie (leg) were ruled not fit to play. Bernie Treweek and Jim Park were the last minute inclusions.

A heavy, waterlogged ground greeted players and spectators. Large puddles of water could be seen all about the oval. The heavy rain had ceased by the time play commenced but the biting wind, of which Collingwood had first use, remained throughout the game. Collingwood was into attack early but both forays were repulsed by the Carlton defence, which had adapted well to the conditions; Gilby, Francis and Gill doing well. Green, Park and Hale were prominent in two Carlton attacks but the Magpie defence prevented any scores. After 13 minutes neither side had scored. Finally, Collingwood snapped a goal after some clever work from their small men and another goal shortly after gave them a slight lead. Carlton was on top in the midfield and elsewhere, with Ron Cooper and Green prominent, but so far the forwards were not playing well. Players from both sides were floundering in the conditions. At the 20 minute mark, Ron Cooper, Green and Pollock assisted Clarke to have a shot but it went wide. A better result came when Clarke passed to Vallence, who marked and kicked Carlton’s first goal. Collingwood replied after Gill couldn’t prevent their third goal. The bell sounded with Collingwood up by thirteen points, but it was obvious that they had not scored enough with the wind.

Within two minutes of play resuming, Carlton had scored two goals. First, Davey kicked from the wing to Clarke who snapped a lovely goal. And then Hale passed to Clarke, whose long kick sailed straight through. Carlton were playing direct football, making good use of the wind. Play was vigorous but fair. Collingwood persisted and Davey and Francis stopped two attacks, but an unchecked player in the forward pocket kicked the pies’ fourth goal with an angle shot. Carlton were fumbling badly and another Collingwood attack, this time around the wing, resulted in their fifth goal. It was an even quarter, with neither side dominant. Francis, Gill and Ron Cooper were playing particularly well. De Luca kicked Carlton’s fourth goal and then the Blues worked forward, with Crisp passing to Jack Cooper for the equalising goal from a left foot snap. Scores were level at the main break but Carlton was looking the more dangerous side.

Play was held up for five minutes at the scheduled resumption after umpire Blackburn failed to appear. When play commenced, Collingwood was into attack first, goaling with a long punt. Carlton replied immediately after Davey, from strong play in a pack, passed to Crisp who handballed to Vallence for a goal. Carlton had got on top early and now controlled the game. Vallence was trapped on the boundary line but chipped to Turner who kicked a running goal for the lead. Green, playing well, sent the Blues forward to Turner who kicked wide to Vallence near the boundary line. His well-judged shot went through for Carlton’s eighth goal. Carlton were playing confident football; by contrast, Collingwood looked rattled and unsteady. Gill was very strong in defence, but the Collingwood side persisted. In a ten minute offensive, their hard pressed forwards could manage only four behinds, defeating their own efforts by bunching up and crowding their play. By contrast, Carlton swept forward, Gill bringing the ball around the outer side and kicking to De Luca who received a free kick. His long kick scored full points. Collingwood got a badly needed goal, but Carlton, supreme now, attacked through Crisp. His nice kick went to De Luca who marked nicely and goaled, which gave the Blues a handy lead of 14 points at ¾ time.

Carlton attacked first but Collingwood fought hard and defended well. It was heavy going, with the ground and ball slippery and waterlogged. Ten minutes of thrilling football ensued before Hale marked and kicked a behind – the first score for the quarter. Collingwood’s tactic of leaving Carlton with a spare defender was odd as the Blues were easily able to repel any attacks. At last, the pressure became too much and Collingwood’s defence cracked. Carlton’s pace and systematic play was winning in every position and when Crisp found Vallence, who kicked the Blues’ eleventh goal, the game was effectively over. Weight was still being used freely, with tempers occasionally fraying but there was not much spite being shown. Ron Cooper, one of Carlton’s best players, swept the ball forward and Vallence made full use of the chance to kick his fifth goal. Late in the game, in semi-darkness and with heavy rain falling, Collingwood goaled but Carlton replied immediately; Vallence handballing to Crisp for the thirteenth goal and a well-earned win for the home side.

Footnote 1: Umpire Blackburn had a tough day. To begin, in the first quarter two dogs entered the field during play and wouldn’t leave. Blackburn caught one but it bit his left hand, causing him some discomfort for a time. He was also visibly suffering the effects of influenza, causing him to be late out after the half time break. And finally, he was booed from the ground by Collingwood supporters after the game, although all reports say that he had umpired fairly well. Blackburn also reported Socks Cooper for the second time in a month and this time the charge stuck. Perhaps it was Socks' dog!! 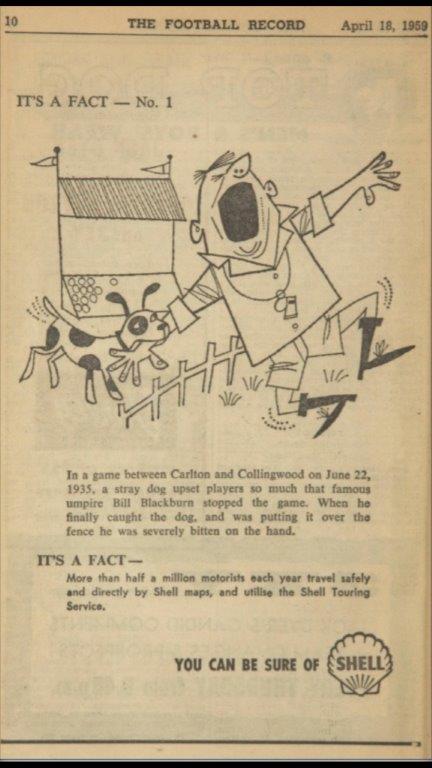 Footnote 2: Keith Shea and Eric Huxtable were both among the best players in Victoria’s 38 point win over Western Australia in Perth.

At the end of this round Carlton were in 3rd spot on the ladder with a percentage of 124.9.