A strong start by Carlton had the game in their grasp early and from there, North Melbourne never really recovered. Although they tried hard and matched the Blues in the second half, their kicking was terrible and Carlton’s tactics more sound in the blustery conditions.
On Thursday night, Carlton announced two changes to the team. Kelly (injured) and Hughson were replaced by Opray and Little. Carlton also announced that ruckman Denis Kelleher had been cleared to South Melbourne, after six seasons with the Blues.

A bitterly cold wind favouring the Macaulay St end was blowing and Carlton, winning the toss, selected to kick with it. The first score came when Cooper kicked to Lefannue, who was slung. From the resulting free, he goaled from a tight angle in the pocket. Carlton was attacking relentlessly and North’s defenders were under great pressure. When they did mount an attack, Mackie saved twice and put the Blues back into attack, from where Lefannue scored his second from the pocket. The wind was suiting the left footer and Carlton were playing to him rather than Vallence, who was closely guarded. Park saved Carlton twice on the goal line after North attacks, but a fine chain of passes resulted in their first goal, to Jack Wrout who would later become a great Carlton player. The wind was playing havoc and Vallence, Shea and Johnson all scored behinds. North’s defenders were playing magnificently as Carlton attacked repeatedly. A free to Bob Green on the wing saw the ball kicked to Jack Green for Carlton’s third goal. Mackie was sterling in defence and easily beating Wrout, who was clearly hampered by injury. Davey broke free from a pack and with a great dash kicked for goal but only scored a minor. Lefannue kicked his third for the quarter, after picking up a miskick from Street. Play had become very vigorous and Umpire Scott was busy but had things under control. Carlton’s fifth goal came after great defensive work from Johnson, and Lefannue and Shea combined to get the ball to Davey who kicked truly. Huxtable and Mackie were very strong in defence during the term. Late in the term, Shea kicked to Lefannue who kicked the sixth goal. A North player was stretchered off late in the term. Johnson again repelled a North attack, and play become quite spiteful as the quarter closed with Carlton a handy 35 points up.

The windy conditions continued to influence the game and caused many kicks to go out of play. Carlton were using the gasometer wing, which afforded some protection and were playing two rovers on the ball, causing the game to become crowded and ragged. Despite the wind, some fine marks from both sides were a highlight of the quarter. Johnson, Bullen and Lefannue combined well to drive the ball to Vallence, who goaled after receiving a free kick. North were now playing better and attacking well, but were missing shots at goal and fumbling badly. Some positional changes late in the quarter resulted in their second goal for the game, after a fine mark. Davey and Street were prominent for Carlton around the ground during the term. At half time, Carlton had kept a comfortable lead of 33 points.

Following the break, Carlton continued their relentless attacking with the wind. Play was very vigorous and players on both side were spoken to by the umpire for some spiteful play. Bullen was doing good things in the ruck and Park and Huxtable were defending resolutely. A behind to Vallence was Carlton’s first score for the quarter. North was playing well and attacking incessantly, but could not kick goals. Egan, with good play kicked to Vallence, who marked and scored an easy goal, Carlton’s eighth. Undeterred, North continued to mount strong attacks and Mackie made some crucial saves. But for their kicking, North could have been much closer on the scoreboard. Cooper got the ball forward but Egan, receiving a free, was unable to convert and kicked a behind. Play was still very strong with no quarter given by either side. Huxtable, now playing attack, scored one of his rare goals after picking up a fumble from a North defender. The bell rang with Carlton 45 points in front. A measure of the poor kicking from North was that since quarter time they had scored 1-11. Carlton weren’t faultless and had kicked only 3-8.

North commenced the final quarter attacking strongly. Park saved a sure goal before Wrout, from a great mark, kicked the third North goal. North Melbourne were playing desperately, but Lefannue made the game safe when he kicked his fifth goal, following a pass from Egan. Both sides were still attacking fiercely but Carlton had slackened slightly and North scored their fourth goal. A free to Vallence made the result secure again, with goal eleven. North, to their credit, continued to attack until the end and scored another two goals six from numerous shots on goals. Better kicking for goal would have seen them closer to Carlton at the end. When the final bell rang, Carlton had won a hard game by 27 points.

This match marked the halfway point of the season. Richmond headed the ladder, with Geelong, Carlton and Fitzroy next. Remarkably, the 1933 Premiers South Melbourne were trailing in eighth – two wins and percentage outside the four.

At the end of this round Carlton were in 3rd spot on the ladder with a percentage of 114.7 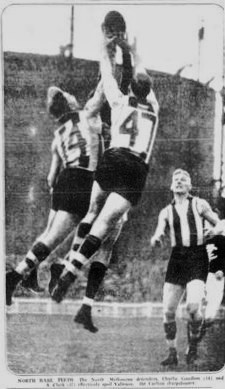 Interesting Fact: This was the second consecutive away win against this opponent at exactly the same margin, a feat we've managed 6 times in our entire VFL to AFL history.