Carlton beat Richmond by 28 points at the MCG. Dean Rice injured a knee in his debut match for the Blues.

Yet another win against the Tigers etc. etc. Other than in 1995 when they hit the top 4, wins against the Tigers were to be expected in the 1990's. Another stat-fest to Greg Williams, Fraser Brown and Barry Mitchell. More ruck domination by Justin Madden. There's no real story here.

The real story was the Carlton debut of Dean Rice. It was on this Friday night game that Ricey, wearing the #23 jumper, would burst out of the blocks and add something to Carlton's forward line that we didn't have to that point. Carlton had a bunch of small forwards in Troy Bond, Ron De Iulio and Adrian Gleeson, but none who could lead and mark. Ricey gave us that mid sized option and boy did we look good with it. Rice took 2 marks in the first quarter as the Blues piled on 6 goals, including one to Rice.

But then, horror for the Blues as Rice went down with a knee. History will show that Rice showed that much that the Blues would keep him on the list for another year. 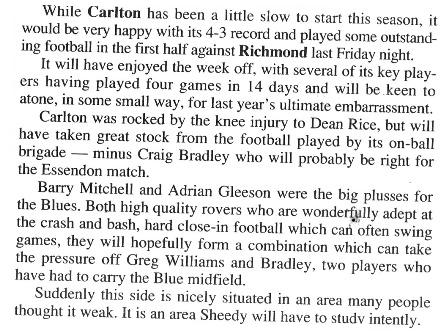