The Blues celebrated Adrian Gallagher's 150th game in style, with this important win over rival flag contender St Kilda on their home turf at Moorabbin. Gallagher became one of the youngest Blues to ever achieve this mark, as Carlton recovered from a tardy start to hit the front just prior to half-time, then controlled the second half to run out winners by 27 points.
After four emphatic victories in a row, the Blues now sat on top of the VFL ladder; two points clear of Essendon, Hawthorn and Richmond, with St Kilda fifth.

The strength and skill of Carlton proved too much for St Kilda when the Blues travelled to the Moorabbin Oval to record their fifth win at the ground - the best record by any League team. It was the Blues 11th win in the past 12 matches against the Saints, who are not reproducing the form shown in earlier games. - Football Record.

Carlton continues on its merry way. The Blues have such a methodical, professional approach that they just continue to kick the sweep. St Kilda was the victim on Saturday. Statistically, Carlton doesn't handle the ball much more than other sides but the effortless way to goals makes up for this. Alex Jesaulenko is giving Carlton a great season in the centre and with Barry Armstrong also playing well, the Blues are giving consistent, systematic efforts. Bryan Quirk is one of the best wingmen in the League and he persistently demomstrates just how good a footballer he is. - The Australian.

We are now playing as a settled combination and our defence against St Kilda did a particularily fine job throughout the game. While their performance lasted 100 minutes, the forward line began to fire in the second half. This gave us the necessary ingredients for victory. - John Nicholls. 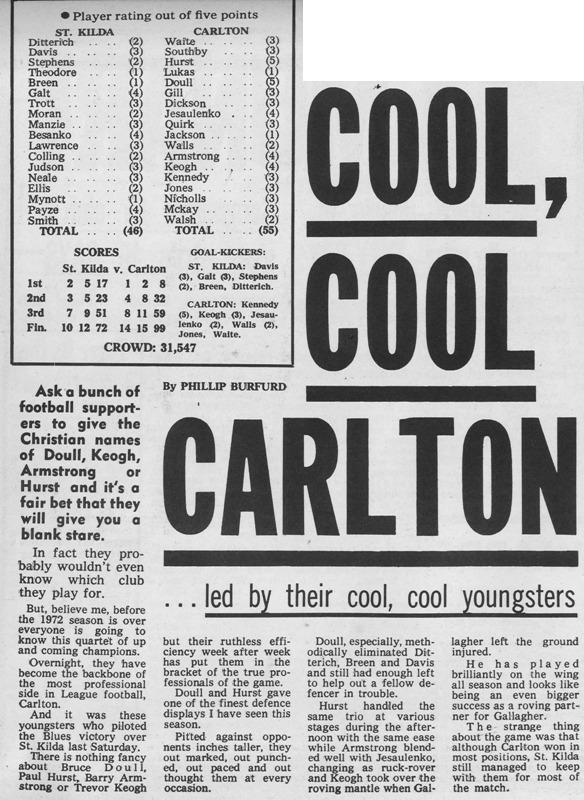