Three wins on the trot with victory over Collingwood at the MCG. Bliss!

A rapidly-maturing Carlton side claimed another big scalp when they accounted for Collingwood by 15 points on this Saturday afternoon at the MCG. Organised in defence and dangerous in attack, the Navy Blues continued their resurgence under coach Brendon Bolton, and energised the entire club with victory over our most detested rival for the first time in four seasons.

Collingwood, like Carlton, had started 2016 poorly. Rated as a finals contender pre-season, the Magpies had lost four of their first six matches to sit 13th on the ladder. The Blues were one rung lower, but coming off successive wins against Fremantle and Essendon. In three changes to the team, Jake Weitering and Andrew Phillips were sidelined by shoulder and hamstring injuries respectively, while Nick Graham was omitted. The chosen replacements were Patrick Cripps, Andrejs Everitt and Andrew Walker, before Simon White pulled out late with a shin strain and Michael Jamison earned a recall. 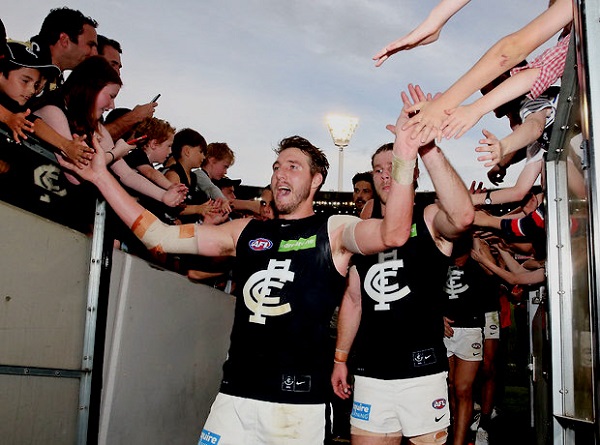 The match began in warm, clear conditions in front of a good crowd of 60,000-plus. Carlton had the best of the early exchanges, until a clanger by Bryce Gibbs gifted the Pies’ first goal. Bryce immediately atoned however, when his long kick to the goalmouth was marked by Levi Casboult, and the big unit banged it through. Liam Sumner added another, but misses by Ciaran Byrne, Everitt and Walker could have been costly. Cripps, Matthew Kreuzer, Gibbs and Ed Curnow were busy in the clinches, before Liam Jones took a big pack mark and kicked truly to put the Blues 14 points up. Late in the term, Dale Thomas left the ground with a damaged shoulder. While he was being treated, Collingwood surged forward and goaled twice to cut their deficit to three points at quarter-time in a hard, entertaining contest.

Thomas rejoined the fray in the second term and cleverly centred the ball that was roved by Marc Murphy for Carlton’s fourth goal. Under a heavy tag, Carlton’s captain was playing on a wing and streaming forward at every opportunity. Meanwhile, the Collingwood masses began hooting Thomas every time he went near the ball. (As some wag said, it had taken them until the second quarter to count to 39!) Casboult was terrific in this quarter, taking marks at both ends of the ground, and kicking his second major to put the Blues 11 points up at the long break.

The third quarter belonged to Bryce Gibbs, who kicked three goals in succession midway through the term as Collingwood threw everything at the Blues. But down back Sam Docherty, Ciaran Byrne and Kade Simpson in particular held the Blues together, while Casboult continued to rule the skies. With ten minutes to play, Levi crashed through Magpie defender Ben Reid with a thunderous hip and shoulder, sending Reid to the bench in a world of pain, and with one quarter to play Carlton led by 18 points.

The Pies pounced again in the opening minute of the final term, beating Carlton’s defensive press and snatching the initiative with an early goal, before Thomas whipped the black and white mob into a frenzy. Well up the ground, ‘Daisy’ ran on to a pass from Matthew Wright. Then, just as he went to take his kick, a Collingwood defender stepped inside the 10-metre exclusion zone. As the Magpie Army fumed, Thomas was given a 50-metre penalty and goaled to stretch Carlton’s advantage to 20 points. From then on Collingwood continued to threaten, but Kade Simpson turned them back time after time, and it was left to Casboult to put the icing on the cake when he marked 45 metres out and kicked his third goal in the final two minutes of a memorable match.

Not for the first time in 2016, this was a victory built on a team effort and excellent coaching, with outstanding contributions from Bryce Gibbs (30 disposals, 8 tackles, 3 goals) Kade Simpson (31 disposals at 90% efficiency, 7 marks) Patrick Cripps (29 possessions (19 contested) 9 clearances, 6 tackles) Levi Casboult (17 possessions, 11 marks (7 contested) 3 goals) and Ed Curnow (24 disposals, 13 tackles, 7 clearances). The Blues were now 12th, looking forward to their next assignment against Port Adelaide at Docklands.

-*Michael Jamison replaced Simon White in the selected side

Winning Streaks : Carlton won three in a row for the first time since 2013 with more joy to come next week....
Between Drinks : This was Carlton's first win over Collingwood for 4 years
Goals Records: In this game Dale Thomas overtook Ang Christou's record of 18 goals in guernsey 39.