Carlton's accuracy around the goals got the Blues home by 1 point over Footscray at the Western Oval.

An exciting game that was goal for goal throughout with the Blues edging out to an 11 point lead in the final term. The Dogs hit back and reduced the deficit to just 3 points with 10 minutes to go. "Racing neck and neck with Carlton defender John James into an open goal Ted Whitten kicked at the ball on the ground, but James reached it a fraction of a second earlier. Like a bullet it shot straight through the centre of the goals and thousands of jubiliant Bulldogs fans cheered a certain victory. But the goal umpire dashed their hopes. He had seen James kick the ball and ran out to tell field umpire Robinson." Both Whitten and James later said the goal umpire had made the correct decision. The Blues hung onto to win by the narrowest of margins, "they fought tooth and nail to stay in front in the most thrilling 10 minutes of the season."

"Our team put up a particularly good display to beat Footscray in the very heavy conditions. They did not suit us, but players adapted themselves well, and fought it out all the way. It was here that our good physical condition came in very useful. We won well on the wings, and our backline, which played it tight and close, was invaluable." 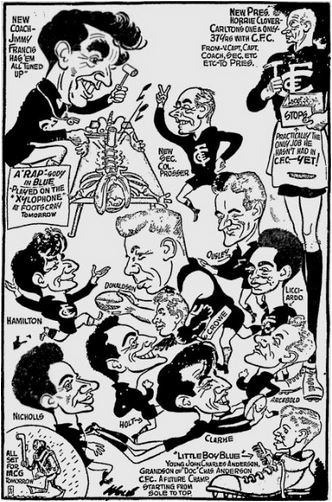