Loading...
Round 6, 2015         The winless Blues reached crisis point with this 9-point loss to bottom side Brisbane at Docklands.

Carlton’s 2015 season hit rock bottom on this Sunday afternoon at Docklands, when the previously winless Brisbane Lions swept the Blues aside in the second half to claim victory by nine points. Coming on top of the previous week’s thrashing by Collingwood, this even more woeful effort plunged all sectors of the club deeper into a maelstrom of criticism and recrimination. 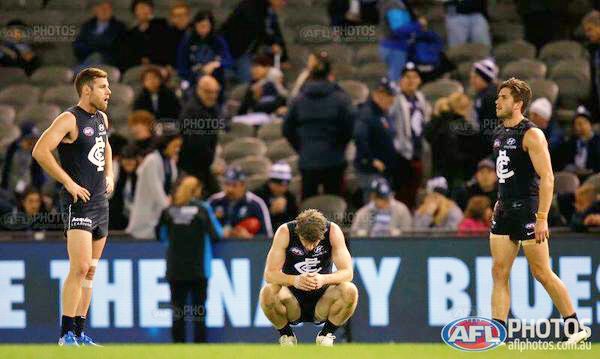 Already hard hit by injury, the Blues lost Lachie Henderson to a hamstring strain during the week, and on selection night, dropped Rob Warnock and David Ellard. Levi Casboult, Dale Thomas and Nick Graham were recalled in their place. Shortly before game time, Kade Simpson pulled out and Clem Smith was given another opportunity at senior level. Graham was handed the substitutes vest, and the Blues ran out to face the only team below them on the ladder.

In an aggression-charged opening term, captain Marc Murphy was rammed into the fence behind one of the point posts, and cleverly goaled from the resulting free to get the Blues away, but Brisbane were persistent and there was only one point in it at quarter time. Chris Judd, Tom Bell, Ed Curnow and Pat Cripps stood out for the Blues in the second term, highlighted by a “hanger” from Thomas, a couple of strong marks from Casboult, and some individual brilliance from Bell. At the long break, Carlton were up by seven points and seemingly poised to take control.

Sure enough, the Blues began the second half well, with Casboult and Liam Jones taking marks, and when Judd kicked truly after ten minutes of play, Carlton led by the biggest margin of the game. However, just as Bell repaid the treatment handed out to Murphy by sending Lion Ben Robertson into the boundary fence and off the field for a concussion test, Brisbane lifted and dominated the last eight minutes of the quarter. Despite a couple of near misses, they wiped out their deficit and hit the front by eight points with a quarter left to play.

The last term was agony for Carlton supporters, as fundamental errors and a lack of leadership condemned the team to another humiliating defeat. What is astounding is that the bumbling Blues could have snatched a last minute victory, had Casboult not missed with his shot on the run, and had Jones not kicked out of bounds with the last kick of the game from 35 metres.

This was surely the worst day in the last 15 years for Carlton, and ramifications were certain to come.