After a 6-goal loss to the Western Bulldogs at Docklands, Carlton slumped to last on the ladder.

Carlton remained winless in 2016 after the Western Bulldogs skittled the Blues by six goals in this Saturday night encounter at Docklands. Blown off the park in the first half, the Blues regrouped after the long break and out-scored their rivals in the third and fourth quarters, but the deficit was way too big and the match was all but over long before the final siren. Both sides suffered significant injuries, with Carlton captain Marc Murphy being physically ill at half-time, then suffering a heavy knock to the head in the third term. He was assisted from the ground with a deep gash above his left temple, and took no further part in the game.

Carlton’s task in this match was always going to be a huge one, facing the competition’s glamour side on the ground where they had won 14 of their last 20 games. The Bulldogs were playing exhilarating football, and sitting fourth on the table with a healthy percentage. Ahead of that challenge, the Blues made three changes to the side that fell to Gold Coast in round 3, omitting Michael Jamison and Mark Whiley, and losing Blaine Boekhorst to a strained hamstring. Into the team came Jed Lamb, Lachie Plowman and Liam Sumner – the latter two making their senior debut for their new club. 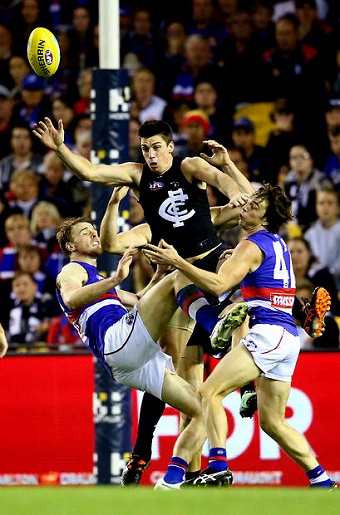 Under the closed roof on a cool Melbourne evening, Carlton lined up with Matthew Kreuzer and Levi Casboult as the tall targets in attack, with Andrew Phillips again the primary ruckman. Down back, Plowman and Jacob Weitering picked up the Bulldogs’ tall forwards Stringer and Boyd, and held their own in the opening exchanges. But it was the Bulldog’s midfield runners and flankers who struck early, and they kicked the first two goals of the game before Dylan Buckley beat the Dogs’ defensive press and replied for Carlton with a neat kick on the run from 30 metres. Lamb and Sam Kerridge combined for Carlton’s second, but by then the Bulldogs were surging forward in waves and sheer weight of possession gave them an 18-point lead at quarter-time.

The second term was a nightmare for Carlton supporters, as all the Blues’ early efforts were ruined by a succession of errors, beginning when Levi Casboult took a strong contested mark 20 metres from goal in the first minute of play, only to shank his kick out of bounds. Sam Docherty then intercepted a Bulldogs’ kick-in, and his shot also drifted wide. The Bulldogs repeatedly punished Carlton’s mistakes, and their sharp transition from defence to attack saw them add 4.3 for the term, to Carlton’s miserable 0.2. Not for the first time in 2016, the Blues were impotent in attack, and at half-time, the deficit had blown out to 42 points.

The situation got worse as the third quarter began, when Stringer (who had been well-held to that point) won a lucky free kick against Weitering and goaled to stretch the difference to 49 points. It looked like the Bulldogs were about to take total control, before Andrew Phillips took a big grab and kicked truly, followed by a courageous mark to Sumner, who knew he was going to get hit hard, and was – but his goal from 20 metres sparked the Blues. Bulldog defender Jason Johannisen then launched a spectacular long goal midway through the term, only to tear his hamstring as he kicked before limping out of the game. Not long afterward, Marc Murphy’s head was split open by the knee of Bulldog Jordan Roughead, and he too, took no further part in the match. Bryce Gibbs’ late major, and a narrow miss by Pat Cripps prevented any more scoreboard damage to the Blues, who trailed by 43 points at three-quarter time.

The last quarter was somewhat anti-climactic, although Carlton salvaged some pride by kicking 2.2 to 1.1 and restricting the Bulldogs to moderate final score of 85 points. It could have been much more, had it not been for the stalwart defence of Sam Docherty (25 disposals, 10 marks) and Kade Simpson (26 possessions, 10 marks). Others who dug deep all match were Sam Kerridge (26 disposals, 5 marks) and Patrick Cripps (23 possessions, 5 marks). Andrew Phillips was the most effective ruckman on the ground, Sumner kicked two goals in a tidy debut, and Plowman’s persistence impressed. Sadly, the same could not be said about Carlton’s forwards.

The Blues sank to the foot of the AFL ladder after this loss, ahead of a tough road trip to Perth to play the Fremantle Dockers in round 5.