Carlton lost to Melbourne by 26 points at Princes Park.

Another demoralising loss. The Blues were giving their fans little to enthuse over. Two goals in the last quarter meant that we had now scored just six majors in the opening three matches. Things didn't improve much in the short-term, either. This was the first time that Carlton had played on a Wednesday in the League.

At the end of this round Carlton were in 7th spot on the ladder with a percentage of 31.2. 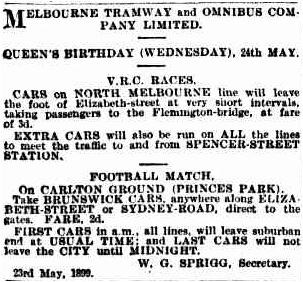 George Young did not play because of a death in the family. Flags at Princes Park were flown at half mast as a mark of respect. (Herald Friday May 26 p2)