Carlton get home by two points in a thriller against Geelong at Princes Park.

Probably our second best win of the year, after the West Coast game.

Despite being well below Geelong on the ladder at the time, Carlton acquitted itself well this afternoon. One memorable piece of play was midway through the last quarter when Geelong's Trevor Poole drifted off in search of the ball rather than stand with his opponent. While doing so his opponent was replaced by Andrew Cavedon who stood alone in front of the Gardiner Stand for at least a minute until the ball was suddenly kicked in his direction.

Cavedon, being a ruckman & not renowned for his dexterity took the mark, had three bounces and from 40 metres kicked the goal that ultimately won Carlton the game. All the while being belatedly chased by Trevor Poole who would no doubt have copped a earful from his coach Malcolm Blight. 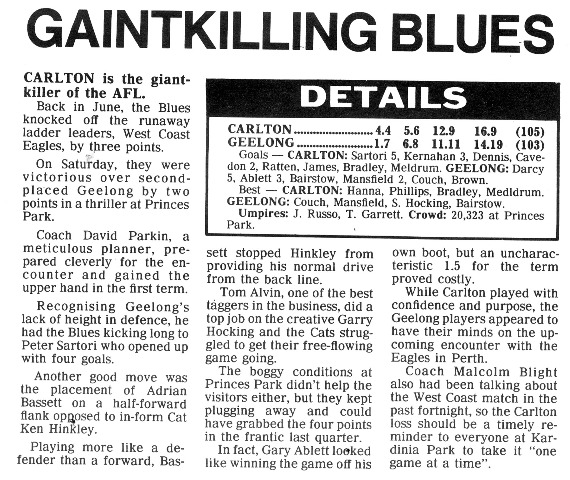